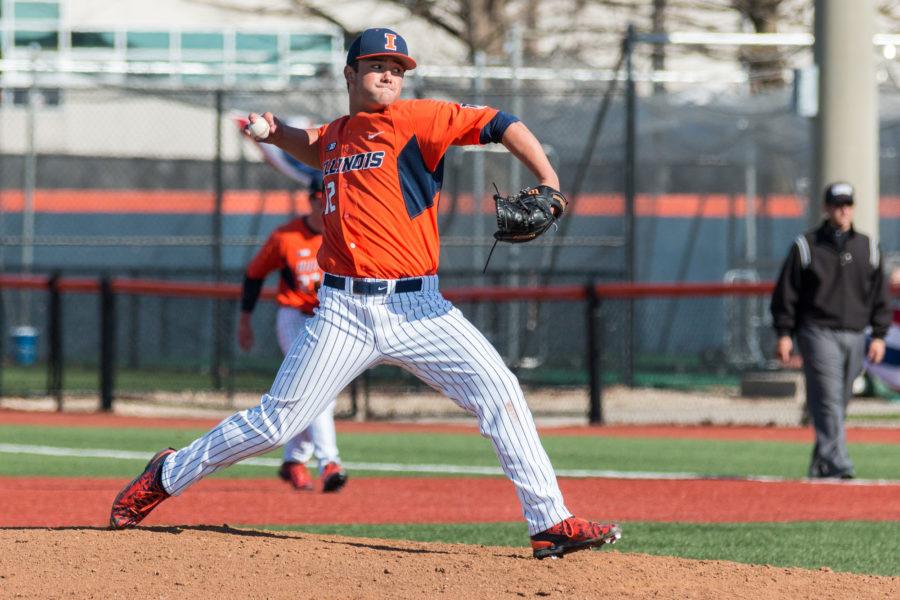 Illinois starting pitcher Cole Bellair delivers the pitch during game three of the series against Penn State on Saturday, March 26. The freshman pitched 8 innings and only giving up one run on six hits in the Illini’s 5-3 loss.

Last season, the prospect of the
Illinois baseball team going up against Illinois State’s pitcher Jacob Hendren
would have been concerning for the Illini.

The lefty posted a 10-2 record
with a 2.80 ERA in 2015, while leading the team in strikeouts (99) and tying the
single-season win record for Illinois State.RB

This season has been a different
oneIL for the senior.

Hendren has not been able to find
that same groove all season long. In seven starts, Hendren has an abysmal 1-6
record and a 7.94 ERA – the worst of the Redbirds’ three regular starters.RB

The Redbirds’ veteran will be
going up against the Illini’s Andrew MamlicIL in a battle of struggling senior
hurlers.

Mamlic is making a return to the starting rotation after being moved
to the weekend bullpen last week. He has the same 1-6 record as Hendren, and an
ERA of 5.35.RB

This will be the second game of
the season between the Redbirds (8-22) and the Illini (13-16). RBBack in March,
the Illini picked up an 8-3 win in Normal, Illinois.RB

While the Illini are still
putting up runs like they did against the Redbirds – they have scored
five or more runs in seven of the 11 games since the last matchup between the
two teams; IL hitting in key situations has been a problem all
season.

Senior second baseman Michael
Hurwitz said the key to better hitting in crucial situations all comes down to
attitudeIL .