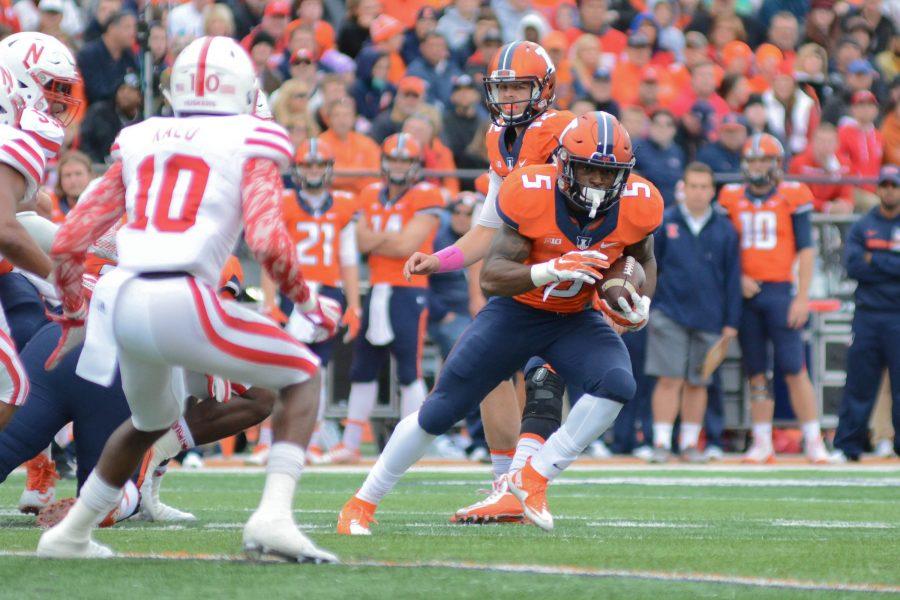 Illinois’ Ke’Shawn Vaughn (5) runs with the ball during the game against Nebraska at Memorial Stadium on Saturday, Oct 3, 2015. The Illini won 14-13.

Since Lovie Smith first took over as head coach of the Illinois football team, Ke’Shawn Vaughn’s family and friends have begun to place some lofty expectations on the second-year back.

Those expectations included tongue-in-cheek murmurs of 40 touches a game from the Nashville native’s inner-circle. Knowing Smith’s preferred hard-nosed style of play, those types of proclamations may not be too far off.

And Vaughn certainly isn’t shying away.

Vaughn was one of the few bright spots from last season, leading the team in rushing as a true freshman and seamlessly filling in for the oft-injured Josh Ferguson. With Ferguson’s departure, Vaughn is the undisputed workhorse in a thin backfield that saw its expected No. 2 Dre Brown tear his ACL during spring ball.

Smith may not know too much about the players he’s inherited until the season actually begins, but he seems certain that Vaughn is ready to handle a full workload.

“He’s our bell cow,” Smith said. “In order for us to have success with our running game, Ke’Shawn Vaughn has to have a good year. He realizes that, and from what I’ve seen, he has a chance to do that.”

Although he led Illinois in rushing attempts, Vaughn carried the ball over 20 times only once last season. That may have been due to former head coach Bill Cubit’s reluctance to get the ground game going — the Illini ran the ball on just 43 percent of their snaps in 2015 which made the passing attack predictable. With the run game as the foundation, senior quarterback Wes Lunt also stands to benefit.

“We’re going to be a run-first team this year and go to the play-action pass off of it, and that’s something different,” Lunt said. “I think that’s huge. A run game is so important in developing a successful passing game.”

Elevating the Illini run game that ranked last in the Big Ten last season may be one of Smith’s toughest challenges, and he’s already made some changes to turn it around. Staying true to his NFL pedigree, Smith has emphasized the importance of utilizing a fullback and has decided to convert two former linebackers, Nate Echard and Austin Roberts, to play the position.

“I think it’s very important,” Smith said. “When you talk about a running game, it’s one thing to spread it out and run the football that way, but there comes a time when you talk Big Ten football, you have a fullback and a tailback. We have a good tailback, and we need somebody in front of him.”

As a back who prefers running in between the tackles, Vaughn is in full agreement with Smith’s decision to employ a fullback.

“It’s a really big help,” Vaughn said. “Going through the spring, we didn’t have a fullback, so running backs were taking on lead blocks. So having a fullback will really take the load off the running backs so we can focus on what we’ve got to do.”

Vaughn added 10 pounds to his 5-foot-10 frame in order to take on a full workload and isn’t concerned about how his body responds to the extra hits. But it’s been his work away from the field with new running back coach Thad Ward that has Vaughn most excited about his improvements.

“I’ve been learning how to break down film,” Vaughn said. “In high school, I didn’t watch film or anything, so learning how to slow down the game and how to set up blocks for the linemen are really the biggest changes for me.”

Vaughn’s emergence as the offensive centerpiece could be key for the rest of the offense to excel. And if Smith has his way, a 40-carry game may be closer to reality than theory.