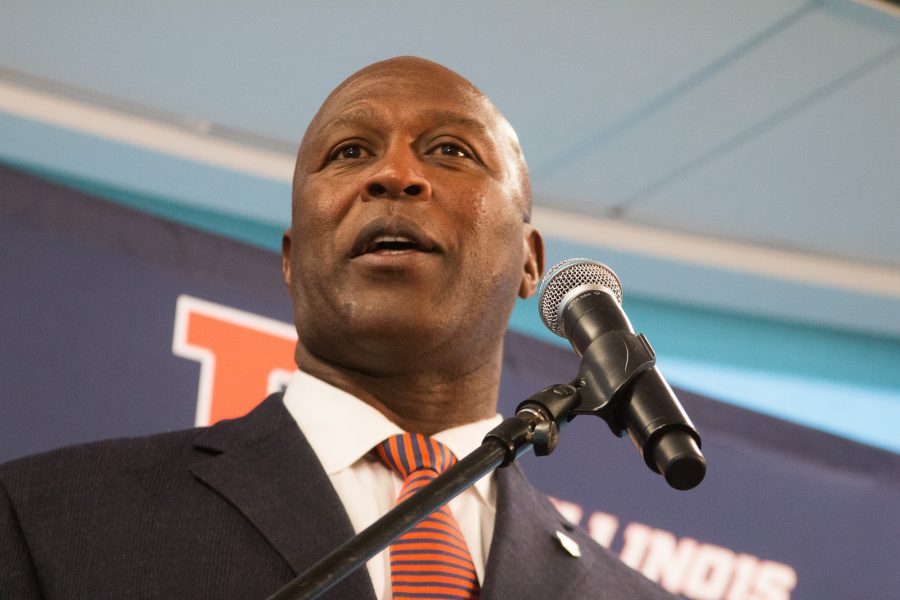 Lovie Smith responds to questions at his press conference on Monday, March 7, 2016.

In his first game-week press conference, Lovie Smith called himself a rookie, telling the media to take advantage of him until he really figures this out.

Lovie is new to this whole college football thing in Champaign. In technical terms, he is a rookie.

But in reality, he’s not. He’s a former NFL coach who knows what he is doing.

And when Lovie takes the field Saturday for the first time as Illini head coach, the Illinois football program will project an air of professionalism that hasn’t been seen here in years.

In short, he was in complete control.

Unlike with recent coaches, Illinois doesn’t have to worry about Lovie ending up with his foot in his mouth. The sports media relations team can just sit back and watch Smith tear reporters apart.

A coach who has survived the Super Bowl media week doesn’t need his hand held in front of the Champaign media.

Smith’s stern, secretive attitude may make things more difficult for us, but it’s a huge relief for the team.

Now, the two have reportedly had their leadership styles compared favorably.

Lunt said Lovie is neither a yeller nor a screamer on the field, “but when something needs to be said, it’s said.”

Those aligned personalities will only help the veteran Lunt take charge this season, particularly with the young skilled players surrounding him on offense.

Sophomore running back Ke’Shawn Vaughn played his first year in a program rocked by instability, but he echoed Lunt’s comments on Lovie’s professionalism.

Vaughn said that no fighting was imperative during “Camp Lovie,” as the coach gave players several warnings and threatened to kick out those who fought.

Lovie’s dealing with 18 to 21-year-olds who are trying to figure college out. Thus far, his strategy is to treat them like men.

The Illini have been riding a rollercoaster for the past year, and it’s about time they’re taken seriously as players. Lovie and Co. offer that opportunity.

With more off-field meetings in preparation, Lovie is creating a team that is well-rounded not only in shape, but in strategy.

For Vaughn, this year is “just normal.”

Lovie’s arrival has turned his players’ focus from the podium back to the field. And that’s a deserved, major change for the Illini.