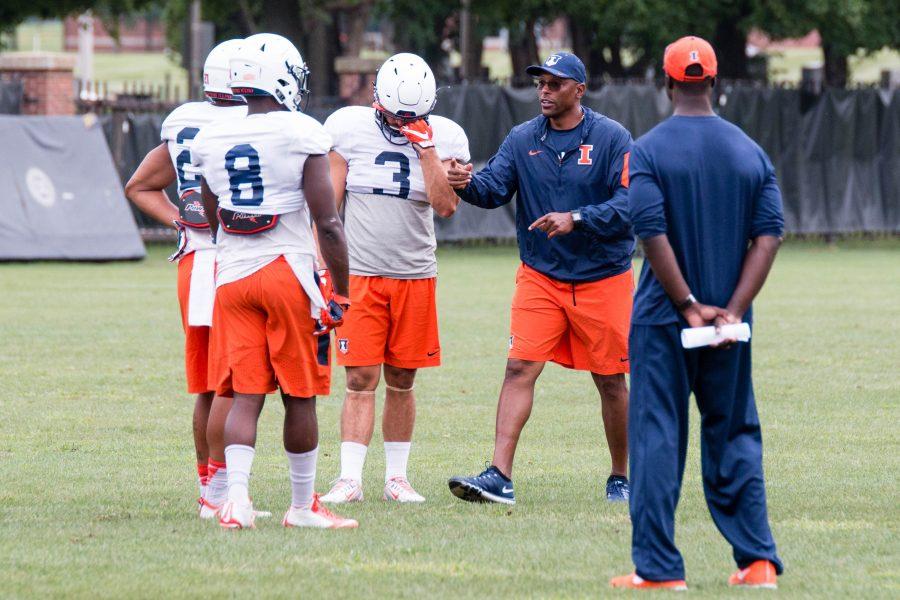 If you were counting the number of African-American head coaches employed at the 128 Division I FBS schools on your fingers in 2015, you’d only need three hands.

According to an annual report released by The Institute for Diversity and Ethics in Sports, only 12.5 percent of the 128 FBS coaches were men of color. Of those 16, 13 were African-American, one was Latino and two were Asian/Pacific Islander.

But for the next report, Illinois can add itself to that list with Lovie Smith.

Just 27.1 percent of assistant coaches in football are African-American, according to the same report.

“I don’t know if it was intentional, but when you are the only school that has a certain look, then more attention will be brought to you,” Smith said. “When I started putting the coaching staff together, I was looking for the most qualified guys that I knew. It just so happened that Garrick McGee was one of them, and he is an African-American, and Hardy Nickerson was one, and he is an African-American.”

Smith has made waves throughout college football since his hiring in March, and the coaching staff he assembled to join him at Illinois would be respectable on plenty of NFL teams. It isn’t just the overflowing NFL experience that sets Illinois’ staff — especially at the top — apart from the rest of the nation, though.

It’s the staff’s diversity, and Nickerson hopes he and his colleagues can begin a shift in these numbers.

“There’s a precedent here,” Nickerson said. “I think there will be a lot of eyes on us to see what we do. People will be watching, and I think we’ll kind of set a trend for what may be to come.”

The Big Ten has been somewhat at the forefront of bucking the anti-diversity trend in coaching. The first African-American to take the helm of a major FBS school was the late Dennis Green in 1981 at Northwestern. But, since then, Smith, Darrell Hazell of Purdue and James Franklin of Penn State are the only African-Americans in the Big Ten.

McGee, who secured his first offensive coordinator job with Northwestern in 2006, was influenced by diversity on the sidelines.

“It means a lot in regards to kids growing up and kids watching,” McGee said. “I’ve always taken a lot of pride in a kid like myself growing up and saying, ‘I can be anything in the world. I can be the offensive coordinator at the University of Illinois.’ I take a lot of pride in that and try to carry myself a certain way so kids can look towards me for that.”

Ever since high school, graduate-transfer linebacker Hardy Nickerson has been able to look up to his father with the knowledge that he could also be a coach one day.

“It’s awesome to have three African-American coaches that are telling us what to do every day,” the younger Nickerson said. “They’re guys we can look up to, guys that are successful, guys that are leaders and do things the right way. So we just come out here and try give it our all everyday.”

Smith has carried a legacy of shifting the narrative in head coaching since he paired with Tony Dungy to become the first African-American duo to coach in the Super Bowl in 2007.

Smith made sure to continue that dynamic of including African-American coordinators. For the Illinois coaching staff as a whole, six of the 10 coaches are African-American.

Moving past his namesake, his defensive prowess and his persona in the media, Smith serves as a unique role model — for players and coaches alike.

“Lovie has always been a role model to both of us,” McGee said of him and Nickerson. “That’s where I see it. I just want kids to hopefully look up to me and be able to say, ‘Someday I want to be the offensive coordinator at Illinois, and I want to represent myself and my family the right way, and that is possible for me.’”

Although representation of black leadership in the NCAA has progressed — there were just four black head coaches in 1994 — there is still plenty of work to be done.

The Institute for Diversity and Ethics in Sports listed just 10.8 percent of the 120 FBS schools in 2010 as African-American head coaches, with the actual number also at 13.

But with leaders like Smith, Nickerson and McGee at the forefront, the NCAA’s young players will continue to have more diversity among their role models.

“If you live in this world, there is diversity,” Smith said. “If people are looking at that program and see somebody that looks like them, well there is nothing wrong with that. We are a melting pot and we want our coaching staff and football team to be one, too.”