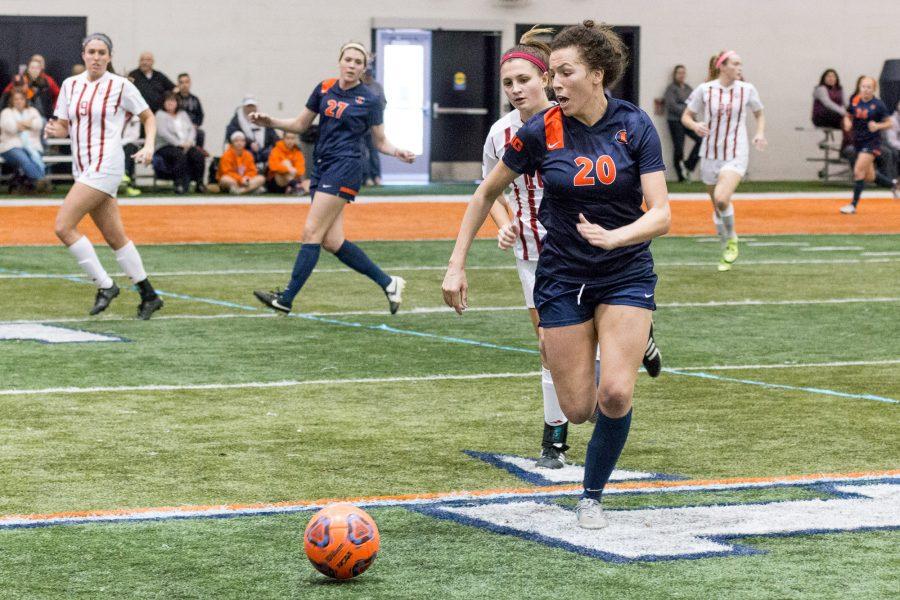 Illinois’ Kara Marbury runs for the ball during the game against Indiana in the annual 7 vs. 7 tournament at the Irwin Indoor Facility on February 27, 2016. The Illini won this game 4-0.

After two losses last weekend in Missouri, the Illinois soccer team is on the road again for one of its toughest matches of the season.

The Illini travel to Texas this weekend, where they’ll face No. 14 Texas A&M in College Station. Illinois will also play TCU in Fort Worth on Friday night.

“This is a really really tough test for us this weekend,” head coach Janet Rayfield said. “It’s two great teams in two great atmospheres, but also we’ve got to bounce back from the weekend and play confident that we’re capable and confident to play in those arenas. “

After wins in its first weekend of play, the Illini were brought down in two tough matches. Illinois saw their first major conference opposition in a back-and-forth match against Missouri on Friday.

Illinois fell to the Tigers 3-2 in overtime. Senior forward Kara Marbury put in her first goal of the season at a crucial moment in the 82nd minute to tie the game and send it to overtime.

Marbury was the Illini’s second leading scorer last season. She leads the team in shots.

The other goal was scored by sophomore forward Patricia George. She was the first non-senior to score this season.

The Illini struggled with shooting over the weekend. The team scored its only two shots on goal, but were outshot by Missouri 24-7.

The offensive problems continued Sunday evening against Saint Louis, when the team didn’t even put up a shot in the first half in a 1-0 shutout loss to the Billikens. In its first weekend of play, the team outshot its opponents 40-28 in two home victories. Illinois was outshot 40-16 this past weekend.

“We have to try to be the team that really takes it to our opponent on the attacking side of things,” Rayfield said. “If we attack well and keep the ball we won’t have to defend as much, that’s really a switch in terms of our mentality.”

Texas A&M is outshooting its opponents 75-46 through four games. Like Illinois, A&M is 2-2 on the season. Unlike Illinois, the Aggies’ two losses have come at the hands of No. 1 Florida State and No. 15 UCLA.

Texas A&M returns a veteran roster that will look to make a deep postseason run. The team has made the Elite Eight for the last two seasons and has made 21 consecutive NCAA Tournament appearances. Ten of eleven starters return from last year’s roster.

TCU is 3-0 on the season and it hasn’t come easy. The team won its season opener 2-1 in overtime at Maryland on Aug. 19 and won in two overtimes at Navy on Aug. 21. The team is riding momentum from a 6-0 victory over Lamar last Sunday.
Friday night against Illinois will be TCU’s home opener.

“It’s just going to be a game with incredible atmosphere,” Rayfield said. “And that’ll be great for us to have to deal with that atmosphere but also, it’s great college soccer. It’s what you want to go play college soccer for.”