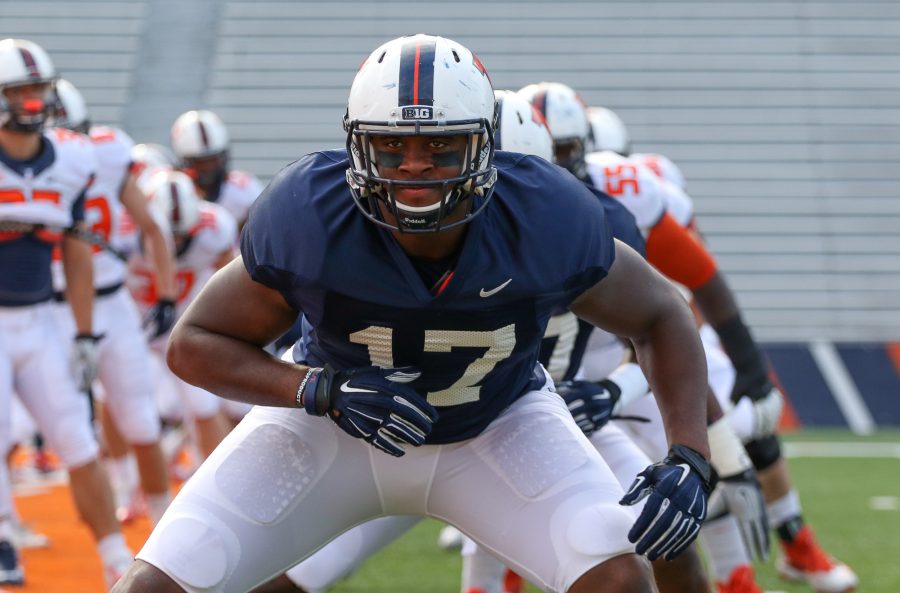 Former Illinois defensive end Jihad Ward made a pact to Illinois the night he was drafted to the NFL.

Four months later, Ward has made sure to live up to that proclamation, even with his first game as an Oakland Raider under his belt.

Multiple Illini, including senior defensive linemen Dawuane Smoot and Carroll Phillips, have said that Ward still keeps in touch with his old teammates through weekly phone calls from the West Coast.

Ward’s is a voice that Phillips looks forward to hearing.

“I just talked to Jihad last week,” Phillips said. “He called me after the (Murray State) game last week, and he was just talking to me and telling me I did a good job out there. I’ll probably call him after this.”

Ward made his first big play at the pro level just three snaps into his first NFL start Sunday against the New Orleans Saints. Following a sack and forced fumble by teammate Bruce Irvin, Ward dove forward to secure the ball with an offensive lineman draped over him.

Ward played 68 percent of Oakland’s defensive snaps — good for sixth among defensive players — and tallied tackles and a quarterback hit in the Raiders’ 35-34 win.

Smoot said that Ward has been in his ear all summer, especially since the recent spike in Smoot’s draft stock. For Smoot, it was special to see Ward quickly make his presence felt in the NFL, which is something Smoot also hopes to be doing this time next year.

“It’s huge,” Smoot said. “He’s always been a guy that’s made big plays, and seeing him still do it in the NFL just proves that he’s as good of a player as he’s always been.”

Smoot and Phillips said they haven’t spoken with Ward since the 48-23 loss to North Carolina on Saturday. When they do, they can expect Ward to call them out on what needs to be cleaned up for this Saturday’s tilt with Western Michigan.

If you ask Phillips, that’s just what brothers do.

“He’s just a motivator,” Phillips said. “He’ll tell us what we messed up on and what we need to improve on. He’s like a big brother — even though I’m older than him, he’s still like a big brother. Jihad, he’s just like one of the brothers.”

When asked what Ward would have pointed out about the UNC loss, Smoot cited the same issue that Head Coach Lovie Smith has been stressing since Saturday’s post-game press conference.

When he does eventually talk to Ward, Smoot may focus the conversation on his fellow D-lineman’s first taste of the NFL rather than the first loss of the Smith era.

Smoot may always remember to get in touch with his former teammate, but he has a short memory when it comes to losses.

“It’s the 24-hour rule,” Smoot said. “You talk about it and get in the film room and figure out the things you could’ve done better. Then you just get over it.”