Illinois football going back to basics in bye week 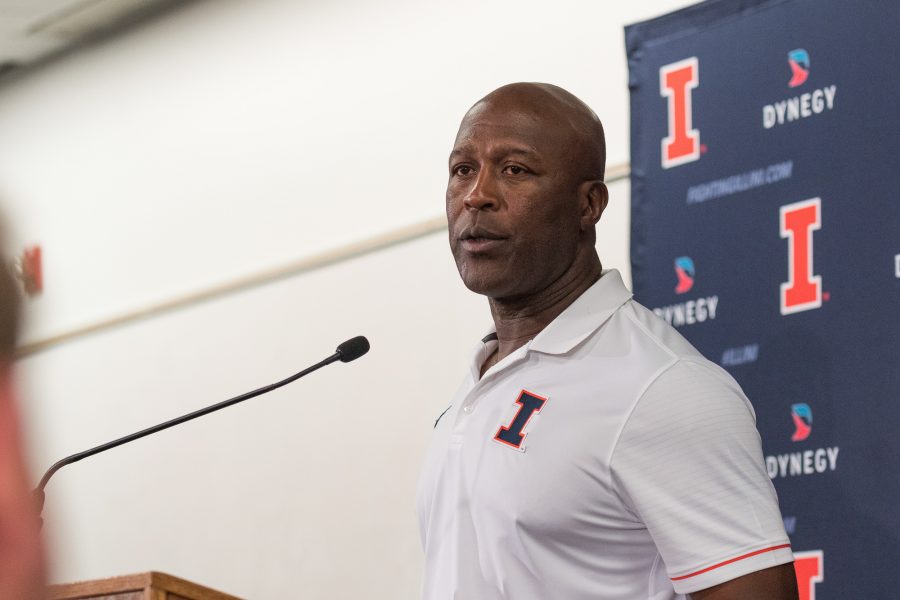 Illinois head coach Lovie Smith answers questions during the press conference after the game against Western Michigan at Memorial Stadium on September 17. The Illini lost 34-10. Lovie has lost two of his first three games as head coach of Illinois.

Following Saturday’s 34-10 loss to Western Michigan, Illinois football has lost two consecutive games. With a Week Four bye, the Illini’s time off is coming at a perfect time.

“We’re not where we want to be, and the bye week is coming at an ideal time for us to fix some things,” head coach Lovie Smith said. “And as a football team, (we’ll) decide exactly how we want this season to play out.”

Smith said that the week will be used for the team and coaching staff to go back to the basics rather than an extra week of game planning for the first Big Ten bout of the season against Nebraska. With only two days of practice, it will also be a week for the Illini to take a step back and refresh.

“If we had won and everything was great right now, we would have had this same routine,” Smith said. “Practice two times, heal up and get ready for this Big Ten push.”

Smith and his staff will also take advantage of the early week off by getting some extra recruiting in.

Looking to build on the August commitments of four-star wide receiver Carmoni Green and three-star defensive lineman Olalere Oladipo, the Illinois staff will hit the road during a crucial time for recruiting.

“We’re going to flood the country looking for some other prospects and other players to come in here,” Smith said. “It’s very important.”

Smith has repeatedly said he doesn’t feel the Illini are where they need to be in any phase of the game. After Saturday’s loss, he was vocal about the disappointing rushing totals. He was also critical of the passing attack, even though quarterback Wes Lunt finished with 312 yards.

Pushing the ball down the field will likely be a main offensive focus in the two weeks of preparation before the Illini hit the road for conference play.

Only three of Lunt’s 29 completions against Western Michigan went for more than 20 yards, one of which was the 56-yard trick play that accounted for Illinois’ only touchdown of the day. Lunt was also sacked four times, lost a fumble and threw his first pick of the season.

“There were probably four or five big plays that we left out there that could’ve changed the game,” Lunt said. “That’s something we’ve got to get better at. This bye week, we’re really going to focus on ourselves more than anything.”

Smith looks for big plays on offense and defense, and the Illini haven’t been coming up with any game-changers on either side of the ball. For the second week straight, the defense did not force a turnover and has allowed 484 total rushing yards in that span.

“All eleven guys at some point made a mistake,” linebacker Hardy Nickerson said. “It’s just going back to the drawing board and emphasizing what we do — and that’s taking the ball away, stopping the run and getting off the field on third downs.

“I’m happy the bye week has fallen where it is and we can go back to work.”