Illinois losing streak ends in a draw at Rutgers 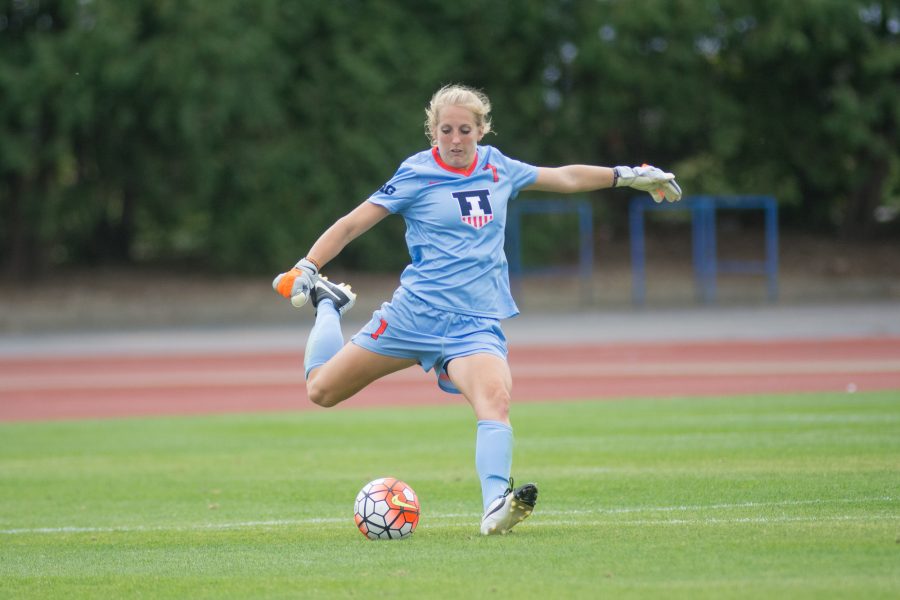 Claire Wheatley sends the ball forward during the game against Maryland at Illinois Soccer and Track Stadium on Thursday. Illinois won 2-1 in double overtime.

Summary: Illinois couldn’t recover from an early deficit at Maryland, but the defense shut-out Rutgers for the team’s first Big Ten point

Quote of the game: “We played with the kind of grit we need to play with in the Big Ten.” – Head Coach Janet Rayfield after the draw against Rutgers

The Illinois women’s soccer team earned its first point of the Big Ten season on the East Coast this weekend.

While the team struggled at Maryland on Thursday night, Illinois held No. 22 Rutgers to a scoreless draw in double overtime Sunday. It’s the Illini’s first road point of the season, snapping a three-match losing streak.

“We defended all over the field,” said Head Coach Janet Rayfield. “The grit that we showed on the field (Sunday) ­— our defensive mentality was as good as it’s been since the beginning of the season.”

Last year’s match against Rutgers brought Illinois one of its biggest wins of the season. While the team played the Scarlet Knights to a 0-0 draw this year, it brought the Illini a critical first point in the Big Ten standings.

Rutgers outshot the Illini in every period of play. Illinois contained the offensive attack that has been explosive this season: The Scarlet Knights had outscored opponents 19-4 and averaged nearly 20 shots per game going into Sunday’s match.

Senior midfielder Allison Stucky scored her second goal of the season near the nine-minute mark, but the team didn’t overcome the early deficit. Stucky’s goal was the first for Illinois in three games, and she is the second Illini to score multiple goals this season.

Maryland added another goal in the 23rd minute. The Illini came out pressing in the second half, outshooting Maryland 11-3, but the offensive push wasn’t enough. Even with the disparity in shots and a 10-1 corner kick advantage, the team wasn’t able to put another goal in. The team also struggled offensively against Rutgers, resulting in its first time being outshot since Aug. 28 at Saint Louis.

“We have to take some more chances, take some more risks,” Rayfield said. “We just have to be better and more precise in those last couple of passes.”

Thursday night’s loss brought personnel changes on the back end that brought in more experience and a stronger result on Sunday.

Wheatley started the game Sunday, and sophomore defender Morgan Maroney started on the back line. Wheatley and senior Michelle Denley have split time this season.

Wheatley is one of the team’s most experienced players, starting every game last year for the Illini. Sunday was her third time staying in the net for the full match.

While it’s a positive step for the team, there’s no break in the schedule. The Illini head to Penn State next Friday to play the No. 16 Nittany Lions, the reigning national champions.

“We just have to keep moving forward,” Rayfield said. “We played with the kind of grit we need to play with in the Big Ten … we’ve got to continue to get better.”