Fabbrini, Illinois hockey have more opportunities to experiment this weekend 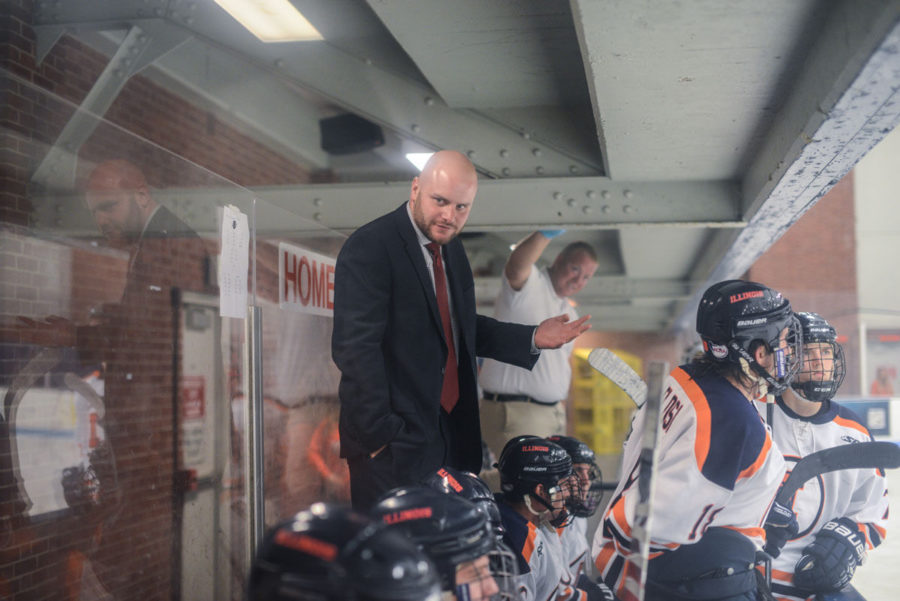 Illinois hockey head coach, Nick Fabrini, speaks to the team during the game against Michigan State on Saturday, September 27th, 2014.

“I wouldn’t call it a measuring stick,” Fabbrini said. “It’s not an evaluation either because we’re always evaluating, and these games mean a lot to us.”

Fabbrini was eventually able to find the right word to describe these early season matchups: opportunity.

“These games are an opportunity to improve before we start getting tested by some of the best teams in the country.”

Fabbrini will use more opportunities this weekend to shake up his lineups before starting the Central States Collegiate Hockey League (CSCHL) conference slate in three weeks against Iowa State.

The Illini head to Johnny’s Ice House in Chicago for a weekend set against Lewis University, a Division II team.

With these three opportunities, Fabbrini will give each of his returning goalies a start on the weekend. Defending CSCHL MVP Joe Olen will get the nod on Thursday before senior Zev Grumet-Morris and junior David Heflin split duties against Lewis.

The Illini opened the regular season last weekend with a 6-2 victory over the Redbirds before grabbing a pair of wins against Michigan State at home to run Illinois’ record to 3-0.

Fabbrini changed his top line mid-game on Friday with the Illini trailing the Spartans, 2-1. He inserted junior Shaunak Pal onto the top line with James Mcging and Eric Cruickshank. The move sparked Cruickshank’s six-goal, two-assist weekend, highlighted by a hat trick on Saturday.

“(The change) helped us and strengthened the lines, and you could see it on Saturday when we were much tighter, and everything worked out well,” Cruickshank said.

“That’s going to be our main focus this week with improving the penalty kill,” Fabbrini said. “You can’t give up two penalty kill goals per game and beat good teams.”

“These aren’t tune-up games, but they’re games we need to be focused and play well to win,” Fabbrini said. “We’re still kind of building and figuring out what guys are going to play in certain situations.”