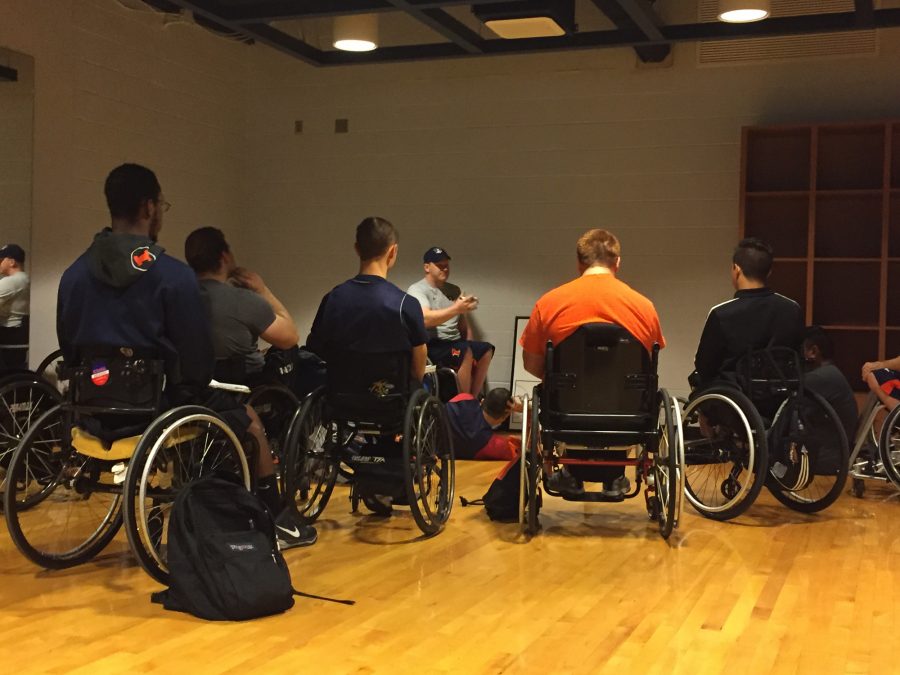 When a student walks down the shiny hallway to Gym 1 in the Activities and Recreation Center, they will pass Gym 2 on the right.

A few feet beyond the gym are the multipurpose rooms to the left and the display case for the Illinois wheelchair basketball programs on the right.

The exhibit showcases the legacy of the program with pictures of previous teams and National Wheelchair Basketball Association (NWBA) championship trophies.

A bit after that, the hallway grows dim, and a raspy voice barking orders in the distance is audible.

The players have spent the past three weeks pushing up and down the ramps in Memorial Stadium to work on their cardio and regain lost strength from the summer. The team moved to the ARC on Oct. 3 to focus more on quick decision-making skills in preparation for the men’s wheelchair basketball season opener Oct. 21-22 at Southwestern Minnesota State University.

Usually, on Mondays, Wednesdays and Fridays, Buchi starts the 6:30 a.m. practice in the classroom by sketching and going over drills with his players. But on Oct. 4, he wanted his squad to spend the first 15 minutes of the day shooting.

He had his team run pick and roll, around the world and three-person weave drills to learn quick decision-making skills.

Buchi said the men’s team hit 10 layups and jumpers simultaneously toward the end of last season during the three-man weave drill. His team’s record is three or four this year.

“We’re not doing well at all,” he said as he sat on the half-court line, out of bounds, watching his players perform the drill.

“Mike is a great guy who shares every piece of coaching material,” Buchi said. “He and I are not on a first-name conversation basis, but I have used a lot of his work.”

He is also learning more plays from YouTube videos and modernizing and speeding up drills from his years on Illinois’ wheelchair basketball team.

“I’m just trying to get them (the players) more game-like,” he said.