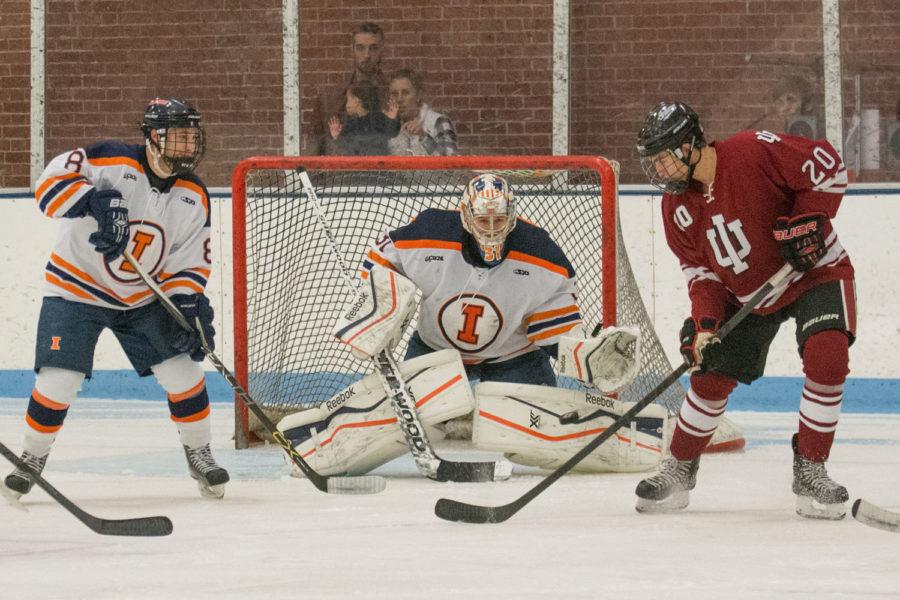 Joe Olen tracks the shot to make a save during the game against Indiana at the Ice Arena on Friday, Nov. 6. Illinois won 5-3.

Illinois at Michigan-Dearborn
Where & When: UM-Dearborn Ice Arena, Friday and Saturday 7:30 PM
Quick Note: The Illini enter the weekend set after losing its first game of the season to Indiana Tech.
Hidden Stat: Junior center Eric Cruickshank is on an eight-game point streak.

Illinois hockey dropped its first game of the season last Saturday, and it will not be getting any easier this weekend.

The team leaves at 6:30 A.M. this Friday to bus north to the University of Michigan-Dearborn, but the early wake-up has been the last thing on the team’s mind after a disappointing 4-3 overtime loss to Indiana Tech last Saturday.

“We have to get back to the way we want to play,” head coach Nick Fabbrini said. “Saturday we got away from our style that we had been sticking to for the first seven games, which is just making hard and simple plays. We tried to do a little too much, and that came back and bit us.”

This weekend’s set against the Wolverines will be the Illini’s first road series against a Division I opponent this season.

Illinois (7-0-1) handed Indiana Tech its first loss of the season in a 7-2 win last Friday before losing Saturday.

Illini freshman forward Luke Forfar has two goals and five points on the season. He said the team needs to end the trend of winning easily on Fridays and coming unprepared on Saturdays.

“You have to do whatever it is to take care of your body to get ready for that next game on Saturday,” Forfar said. “You’re going to be sore. You’re just going to have to get ready to play and get yourself in the mindset to play every single night.”

Fabbrini started defending-CSCHL MVP senior goalie Joe Olen in the net Friday and sophomore David Heflin on Saturday. He plans on starting Olen and backup Zev Grumet-Morris in this weekend’s games, but Fabbrini said he was happy with Heflin’s effort in the loss.

“David played fine,” Fabbrini said. “All of our goals were breakdowns in front of him, and a lot of them were direct results of turnovers on our part. We let him down a bit.”

The Wolverines enter this weekend 2-4 overall and 0-4 in Great Lakes Collegiate Hockey League play. Michigan-Dearborn dropped two games last weekend to Adrian College but are still ranked No. 14 in the ACHA rankings.

Forward Tyler Groat leads the Wolverines with six points, including four goals, this season. Michigan-Dearborn finished last season 19-4-2, but head coach Christopher Haltinner’s club has gotten off to a slower start in 2016.

“I know (Dearborn) is a good team,” Fabbrini said. “They’re probably going to be the best team we have played so far this year, so we’re going to have to be ready and play better than we have to this point.”