Illinois football chimes in on the Cubs mania 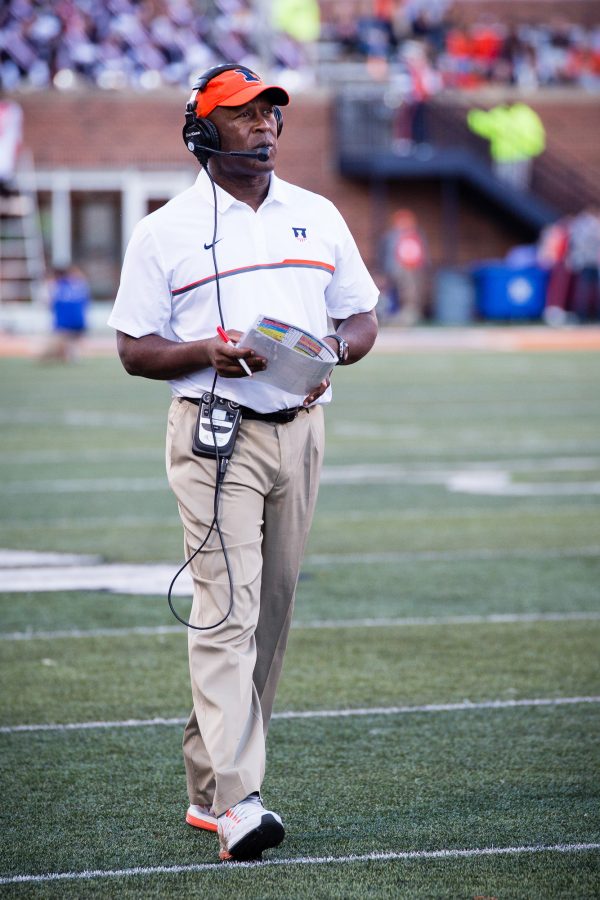 Illinois head coach Lovie Smith walks down the sideline during a TV timeout in the game against Purdue at Memorial Stadium on Saturday, October 8. The Illini lost 34-31.

Illinois football’s head coach took a clear side in this year’s World Series matchup, a historic meeting between the Cleveland Indians and Chicago Cubs, two teams that have gone a combined 176 years without winning a title.

“Here in Illinois, I’m just like everyone else,” Smith said. “I’m excited about what our Cubs will do.”

After nine years with the Chicago Bears, Smith hasn’t forgotten his roots in the Windy City. He also referred to his friendship with Cubs manager Joe Maddon, whom he met in Florida when Smith coached the Tampa Bay Buccaneers and Maddon was still at the helm of the Tampa Bay Rays.

“Joe Maddon’s a heck of a coach, a friend” Smith said.

“It’s about Chicago right now,” he added. “It’s saying an awful lot to be able to get to the World Series, so you’ve got to take your hat off to both teams.”

With 29 players on the Illini roster hailing from Illinois, Smith and the coaching staff have noticed the buzz around the Cubs throughout the playoffs. Chicago’s opponent also has some support among the Illini — 12 players are from the Cleveland area.

One of those players is senior offensive lineman Joe Spencer, who actually grew up a Cincinnati Reds fan, making this year’s World Series a very conflicting time for him.

“For me, it’s kind of a tough situation,” Spencer said. “I’m a Reds fan so Cleveland is our in-state rival and the Cubs are our division rivals. It’ll be on, and guys are excited — rightfully so because we’ve got a lot of Ohio guys and a lot of Chicago guys.”

Although the Reds were 4-15 against the Cubs in the regular season, Spencer won’t have to worry about his baseball team losing to the North Siders this October, which is something senior linebacker Hardy Nickerson has already gone through.

Because of his time in California and his father’s most recent coaching gig with the San Francisco 49ers, Nickerson has an affinity for the San Francisco Giants, whom the Cubs beat in the National League Division Series.

That won’t prevent Nickerson from rooting for his new home-state team, though.

“From what I’m hearing, a lot of people around here are excited about the Cubs being in the World Series,” Nickerson said. “It’s the state’s team, I would like to the the curse go to rest.”

Even for coaches and players who have no horse in this year’s race, the Illinois connection is enough for the majority of the team to rally around Maddon, Kris Bryant and company.

Offensive coordinator Garrick McGee even sees a hidden personal benefit in the World Series coming to the state of Illinois.

“To have all the recruits watching our state and being comfortable with whats going on here — sure, I’m all over it,” McGee said.

“When you’re in the state of Illinois, you’ve got to root for your team.”

Game One of the World Series kicks off Tuesday in Cleveland, with a potentially series-clinching Game Four occurring the night of Illinois’s homecoming game against Minnesota this Saturday.