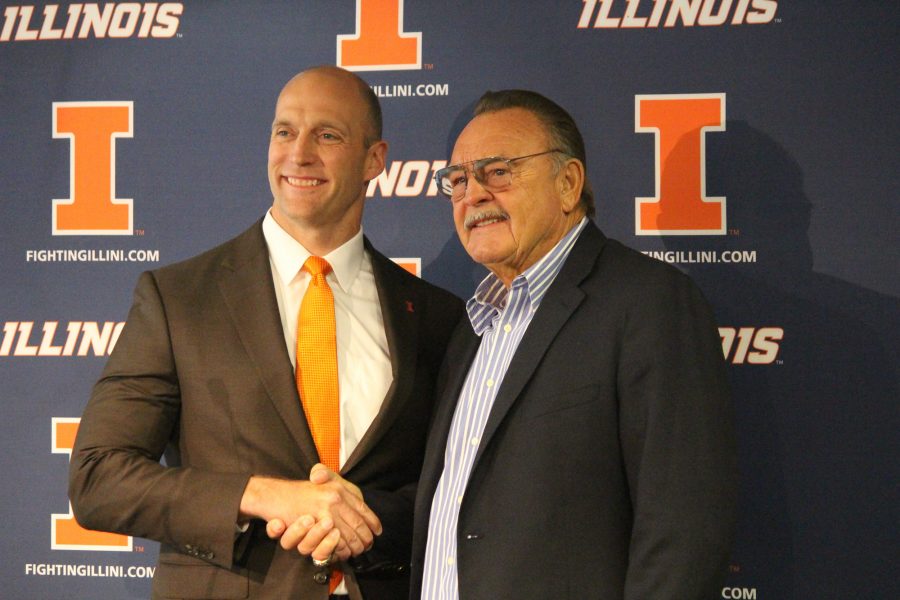 Following a Saturday home game nearly a decade ago, Josh Whitman sat in his small home on Locust street with two of his Illinois football teammates.

Rather than in a chair or on a couch, Illinois’ starting tight end took his seat on the floor, his head titled upwards at a man who could control a room the same way he controlled the gridiron throughout the 1960s and 70s.

That man was former Illinois linebacker Dick Butkus, who was in town visiting his nephew and Whitman’s roomate, Luke Butkus.

Whitman and his two roommates — Luke, an offensive lineman and Nick Piazza, a safety — were in awe of an all-time great with a knack for storytelling.

“It was like sitting at the feet of Santa Claus on Christmas Eve,” Whitman said. “It was one of the most memorable nights of my life. There are some surreal moments that come with this job for me, and having the opportunity to stand here and introduce Dick Butkus certainly ranks at the top of that list.”

On Thursday, Whitman introduced Butkus as the first official inductee into the newly announced Illinois athletics Hall of Fame.

“He is someone who I consider to be the greatest living Illini,” Whitman said.

In his four years as an offensive lineman and linebacker for the Illini, Butkus compiled 374 total tackles, led Illinois to a Rose Bowl victory in 1964 and came third in Heisman voting that same year. He is one of two Illini to have his jersey retired, the other being Red Grange, and today’s annual award for the best collegiate linebacker is named after him.

But amid all those accomplishments and accolades, becoming the first inductee of the Illini Hall of Fame brings something a little extra for the 73-year-old.

“I am honored and proud that you’ve bestowed this honor on me,” Butkus said. “I totally didn’t expect it, especially to be the first one. I’m greatly humbled.”

Butkus arrived to Champaign for Thursday’s special announcement on Wednesday night and will remain in town for homecoming weekend. One of the first stops on his itinerary was a stop at Wednesday’s football practice to greet head coach Lovie Smith and the rest of the coaching staff — including his nephew, Luke, who is now on the sidelines as the Illini’s offensive line coach.

Much has changed at Illinois since Butkus graduated in 1964.

“High rises — are you kidding me?” he exclaimed when comparing then and now.

But the changes that Butkus can put his stamp of approval on are happening within the Illinois football program and the athletic department as a whole under the guidance of Whitman.

“I had trouble accepting it knowing he was my nephew’s roommate,” Butkus joked over Whitman’s hiring. “We got over that hump, and I think he’s been a great addition. “He’s going to continue on with the success of all the programs here.”

Whitman relived the enjoyment he felt as a twenty-something sitting on the floor of his modest Champaign home when Butkus opened Thursday’s press conference with a story.

He explained that he made two life-changing decisions as an 18-year-old — to propose to his high school sweetheart and to commit to the University.

And over 50 years later, Butkus is still married to his wife, Helen, and said he would choose Orange and Blue all over again.

“If I was being recruited by them now, I really don’t think it’d be that big of a decision,” Butkus said.

“We’ve got to get that pride back and let these kids know they’re going to, quite frankly, a hell of a school.”