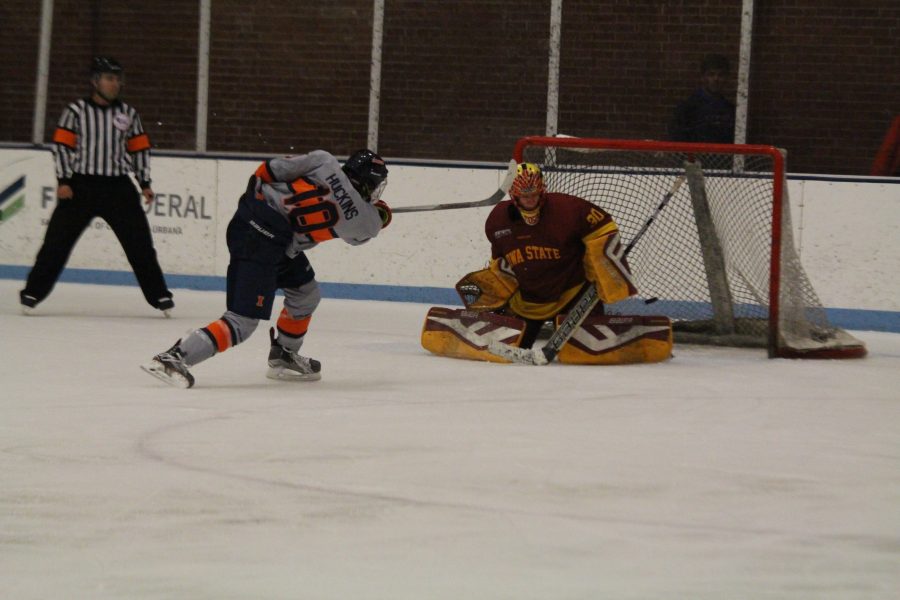 Kendall Huckins (10) takes his penalty shot against Iowa State’s goalie and gets a point for Illinois to keep it a close game at the Ice Arena on Friday, Oct. 28, 2016. Illini lost 5-4 to Iowa State in a shootout.

Iowa State began warming up as a team over an hour before the game Saturday, racing each other on the cement path outside the glass at the University of Illinois Ice Arena. Several Cyclone players passed a soccer ball between each other as the team stayed loose before hitting the ice.

The warmup clearly helped, and Illinois hockey dropped its fifth consecutive game that night. The Illini (7-3-2) lost both games this weekend to CSCHL rival Iowa State.

“It definitely hurts,” Illinois freshman forward Luke Forfar said. “We have to put our heads down and just keep working, and not focus on the fact that we lost.”

Illinois battled back from a pair of two-goal deficits Friday to take a 4-3 lead with six minutes to go in the third period. Less than a minute after taking the lead, Cyclones Clayton Janecke knotted up the score with a goal on Illinois goalie Joe Olen.

Both teams went scoreless in the overtime period, and Iowa State won the shootout 2-1. Sophomore forward Colton Kramer clinched the victory for the Cyclones with a goal in the third round of the shootout.

While the Illini were able to fight back on Friday, Iowa State never looked back after three first period goals on Saturday in the 6-2 win. Illinois head coach Nick Fabbrini pulled Olen after the first period, replacing him with backup David Heflin for the remainder of the game.

“We needed to change momentum around a little bit,” Fabbrini said. “I didn’t think the guys were battling as hard as we needed to, but (subbing in Heflin) worked for a time, and unfortunately we gave one away at the end of the second.”

Junior forward James McGing was shifty with his stick handling on Saturday, scoring a second period goal for Illinois. McGing was slow to get up three times in the first period after being checked into the boards, none of which resulted in a penalty for Iowa State.

Forfar praised McGing’s ability to take the hits and return to the game making an impact for his team.

Illinois forwards Eric Saulters and Kendall Huckins were ejected late in the third period for fighting. Both will likely serve the league’s mandatory one-game suspension for fighting in the team’s next game Friday night.

Fabbrini said he wanted his team to play physical against a strong team like the Cyclones.

“Some of the (aggression) was OK,” Fabbrini said. “I thought we did a good job getting ourselves back in the game, but at the end, we’d like to keep our composure a little bit better.”

Illinois returns to the ice next this weekend against Illinois State, a team that the Illini have already defeated twice this season. But on a five-game losing streak, Illinois knows there is work needed to get back on the right track.

“We’re not going to get any better if we keep looking back at what happened,” Forfar said. “All we can do is just get better game in and game out every day when we come to the rink.”