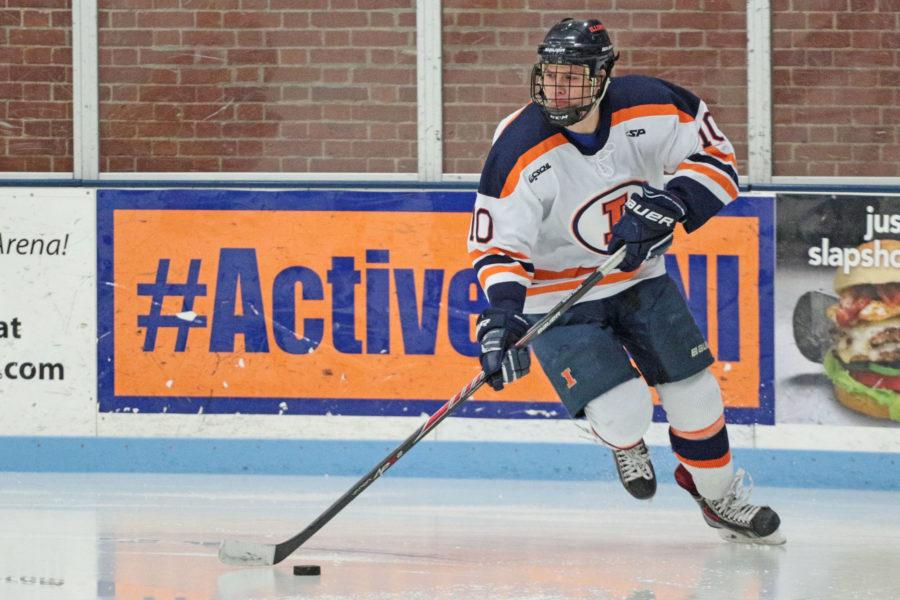 Illinois' Josh Belmont (10) manuevers the puck down the rink during round one of the CSCHL hockey tournament v. Iowa State at the Ice Arena on Friday, Feb. 20, 2015. Illinois won 2-1.

Illinois hockey is on a five-game losing streak but will make program history this weekend when its game Friday night is broadcast on ESPN3.

“It’s really exciting for us,” said Illinois head coach Nick Fabbrini. “It’s the first time we’ve ever been on a national broadcast. It’s huge for our program and the league as a whole to be included in something like this.”

The game against Illinois State this Friday was tabbed as the ACHA Game of the Week last week. Illinois will join Ohio and Iowa State as the three Central States Collegiate Hockey League (CSCHL) teams to be featured on the national broadcast so far this season.

Fabbrini says he is using the publicity as a chance to recruit young hockey players to Champaign.

“We’ve talked to recruits and let them know that this will be happening,” Fabbrini said. “Some of the programs that we compete against for players, like Division III schools, aren’t included in something like this. It’s just another edge we have over some of those smaller NCAA programs.”

With Dad’s Weekend on campus and the ESPN3 broadcast, the University of Illinois Ice Arena is expected to be sold out for both games against Illinois State.

Junior forward and captain Joey Ritondale says the team is looking to keep things as normal, even with all the extra eyes on the team.

“Everyone is pretty excited for (the broadcast), but it will just be another game once we go out there,” Ritondale said. “For the new guys they’ve never seen a crowd like this before. There’s going to be more than 2,000 fans here, so it’ll be a really exciting environment.”

Illinois (7-3-2) has dropped five straight contests after starting the season with seven wins. The Illini lost a pair of games to No. 2 Iowa State last weekend, including a 5-4 shootout loss on Friday night.

Ritondale said the team is trying to focus on what it did well last week despite the two losses.

“(Iowa State) is a great team, but I think we matched the intensity very well,” Ritondale said. “It was just a couple mistakes and they capitalized on them. What we did this weekend we can definitely take going into this next weekend.”

Senior goalie Joe Olen started both games against the Cyclones but was removed after the first period on Saturday. Fabbrini said backups Zev Grumet-Morris and David Heflin will be starting this weekend against the Redbirds.

“Joe (Olen) is a little banged up and needs some time off,” Fabbrini said.

This weekend’s games will be the seventh and eighth matchups between Illinois and Illinois State since the start of last season. The Illini took both meetings earlier this season in Bloomington, Ill.

“We know what (Illinois State) brings,” Ritondale said. “If we just play the way we play and build off this past weekend, we’re going to have a really successful weekend.”