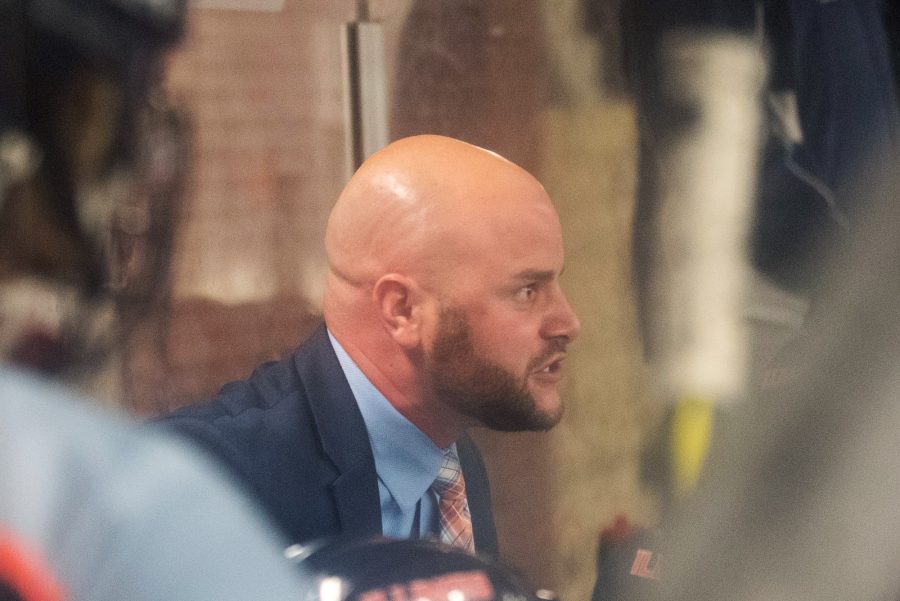 Head coach Nick Fabbrini thought this weekend was a milestone for his program.

Summary: Illinois hockey outscored the Redbirds over the weekend, 15-1. The team ended its five-game skip with the pair of victories.

Key player: Luke Forfar: scored a hat trick in the team’s 11-0 win in its second game.

Quote of the game: “Anytime the building is full like that, the turnout is always great and we always appreciate the support.” -head coach Nick Fabbrini

Up next: Lindenwood Nov. 11

For the first time in the program’s history, the Illinois hockey team had its Friday game versus Illinois State broadcast on ESPN3.

The Illini joined Ohio and Iowa State as the only teams in the Central States Collegiate Hockey League to be featured on the national broadcast this season, something head coach Nick Fabbrini saw as a a milestone for the program.

“It was really exciting and a big step for the program and ACHA as a whole,” Fabbrini said. “Anytime you get national exposure for a great level of hockey it’s a great thing. I don’t know the ratings, but I feel that they did pretty well for having a big name school and we were honored to be a part of it.”

Illinois won the first of a two-game set 4-1, scoring the final four goals of the contest after ISU scored first. The win ended a five-game skid for the Illini, giving them a much needed confidence boost early in the season.

Defense was the key to the first game, as the Redbirds didn’t muster double-digit shots on goal in any of the periods, finishing with only 14 on the entire game.

Illinois was not only under the scope of a national audience but also one that has ties a little closer to home. The University hosted its annual dad’s weekend, which always bring in a bigger crowd for the hockey games.

Fabbrini said that the bigger audience played a role in not only the crowd’s support but also the number on the scoreboard.

“It definitely played a part,” Fabbrini said. “Anytime the building is full like that, the turnout is always great and we always appreciate the support. The players were really excited to see some of their family members in the stands.”

The team dismantled Illinois State by a score of 11-0 Saturday night.

One of the highlights from the victory was a hat-trick from freshman Luke Forfar, who got his third goal with only 15 seconds left in the third period.

“I think it’s going to be big for him,” Fabbrini said.

Up next for the team is a slate of four consecutive road-games. First on the list is Lindenwood, who is coming in with a 7-8-1 record. The three-time national champions will be looking to bounce back after being shut out in both of its past two games.

Fabbrini said the trip will allow him to gauge where his team is compared to some of the best in the country.

“They are two of the best teams in the country, and it will be a big key for us,” Fabbrini said. “Good teams make you pay when you make mistakes so we have to limit those in order to have a successful trip.”