George Jr. and the Illinois football team are not backing down against No. 7 Wisconsin 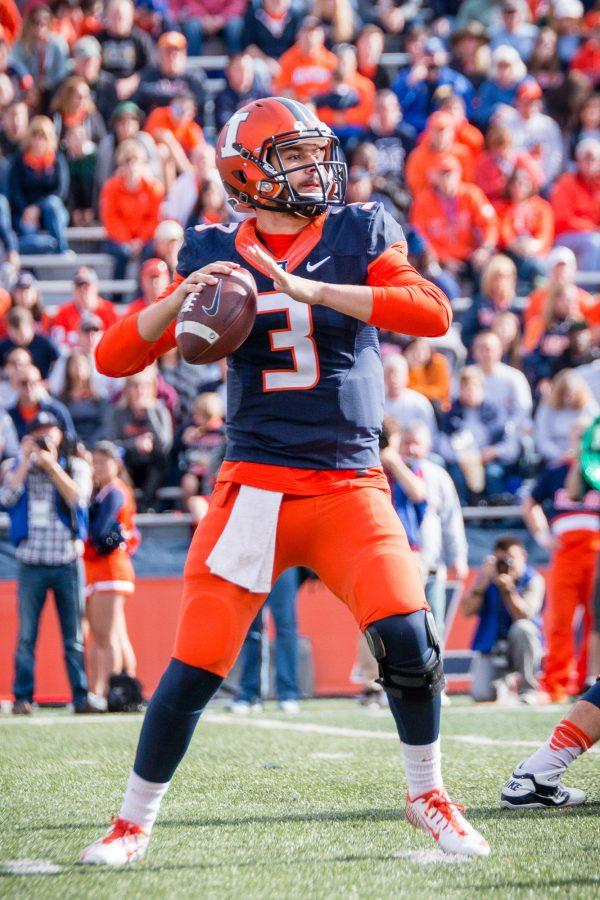 Illinois quarterback Jeff George Jr. looks to pass the ball during the game against Michigan State at Memorial Stadium on Saturday, November 6.

Lovie Smith hasn’t been shy about his lack of familiarity with most of Illinois’ opponents this season.

It has been common for Illinois’ head coach to experience opposing stadiums for the first time in his career whenever the team hit the road.

But when the Illini head to Madison, Wisconsin, to face off against the No. 7 Badgers this Saturday, Smith should know his way around the facilities relatively well.

One of the first stops in Smith’s 30-year coaching career was Wisconsin when he served as the team’s linebackers coach in 1987.

“Coach Chryst does a good job,” Smith said. “We have a long history together as I’ve talked about, and what you see is a traditional Big Ten powerhouse.”

Illinois has lost six-straight matchups with Wisconsin, with its last win coming in 2007 at home. The Badgers’ current six-game head-to-head win streak is tied for the longest in the two schools’ all-time series, which dates back to the 19th century.

Wisconsin is currently gridlocked in a three-way tie with Minnesota and Nebraska for the Big Ten West lead. Since their narrow loss to Ohio State, Wisconsin has won three-straight conference contests by an average margin of 9.3 points while holding those three opponents to an average of 11 points per game.

Chryst’s squad has the second-best defense in terms of scoring in the Big Ten, behind only Michigan.

“We know we’re going to have to be at the top of our game,” Smith said. “We’ll need to play better than we did this past week. We realize who we’re playing, but what an opportunity for our young football team to have a chance to play a great team like that.”

With trips to Michigan and Nebraska under its belt, Illinois is no stranger to playing under hostile conditions, and this week will be no different. Wisconsin has played in front of crowds of at least 77,000 in every game at Camp Randall Stadium this season.

In order to prepare for the distractions of being on the road, the Illini practice with simulated crowd noise blaring out of the speakers of Memorial Stadium.

“We make it extremely loud so they get used to really concentrating and paying attention,” offensive coordinator Garrick McGee said. “We try to manufacture that as much as we can during the week of preparation.”

McGee said Camp Randall was one of his favorite stadiums to play in and expects the Illini to be used to unfriendly environments at this point in the season.

“When you’re recruited to play on this level, it’s kind of what your looking for. Most of these places at this level of play, in any conference you’re in, are pretty wild, hostile crowds.”

Besides handling heavy pressure from the opposing crowd, McGee also displayed confidence in redshirt-freshman quarterback Jeff George Jr., who seems to be gaining more comfort with each start. Although senior quarterback Wes Lunt continues to dress, he still hasn’t seen any game action since injuring his back early in the season.

George is projected to start his fourth-straight game under center, and with junior Malik Turner still dealing with a concussion, sophomore Sam Mays and senior Zach Grant could play big roles once again.

And while George gains more confidence in himself, the same confidence seems to be extending to the weapons around him.

“I got all the faith in our guys that if I put it up there, they’re going to come down with it,” George said. “Just being more comfortable out there — every game, you learn more and you become more confident.”