Illinois recruits five-star and four-star for 2017 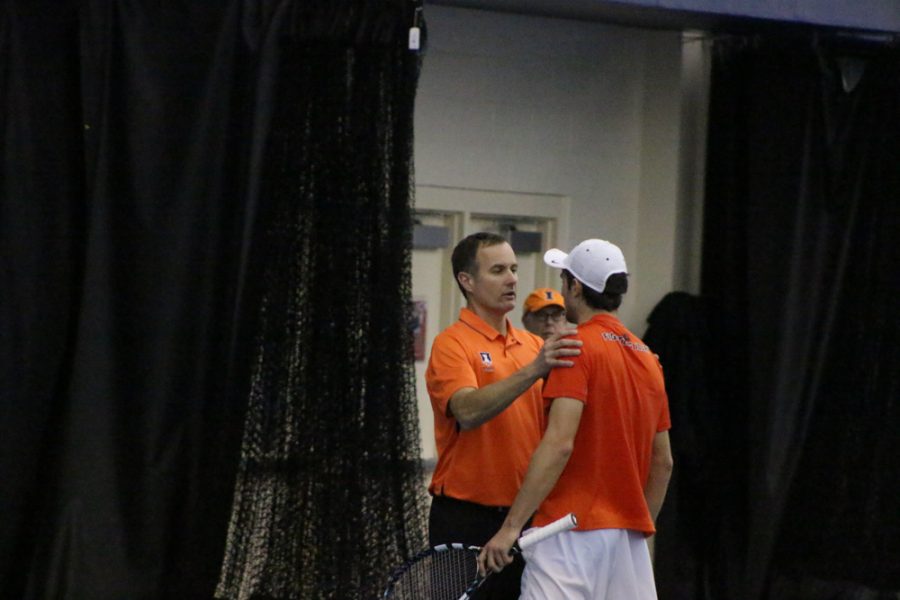 Head coach Brad Dancer talks to Illinois’ Aleks Vukic in the match against TCU at the Atkins Tennis Center on Feb. 28.

By now Illinois’ 2017 signee Alex Brown is familiar with the chemistry on the men’s tennis team: He’s already faced off against one of his future teammates.

In August, Brown fell to freshman Aleks Kovacevic in the quarter-qualifying round of the USTA B18 National Championships.

But that match wasn’t their first meeting.

“I found out maybe a month before that I was going to play him,” Brown said. “I was with him when he took his visit in the summer. I got to know him very well through the recruiting process.”

Athletes from the Midwest and Missouri Valley play within the same tournament sections, making it hard not not cross paths with potential future teammates.

“Zeke Clark I knew from tournaments too,” Brown said. “Fletcher Scott even trains at the same place where I train.”

Brown is one of three 2017 recruits that signed National Letters of Intent this week. The signees feature five-star recruits Brown and Scott, along with four-star Caleb Chakravarthi.

Although the program recruits more than just that region, head coach Brad Dancer says the team continues to find strength in its midwest roots.

“Our team has been midwest based for a long time, and for us we have some Missouri Valley guys too,” Dancer said. “The midwest culture has great family qualities in general, and it helps our fan base.”

Brown is the No. 1 recruit in Iowa and is ranked in the top 10 nationally. The high school senior has made appearances in 12 ITF and USTA tournaments in 2016 alone.

Scott also snatched the No. 1 slot in Kansas, which Chakravarthi won at the Silex Canada Junior ITF Vancouver Championships this year, and is among the top-20 players in California.

The men’s tennis program has plans to sign more players as the academic year continues.