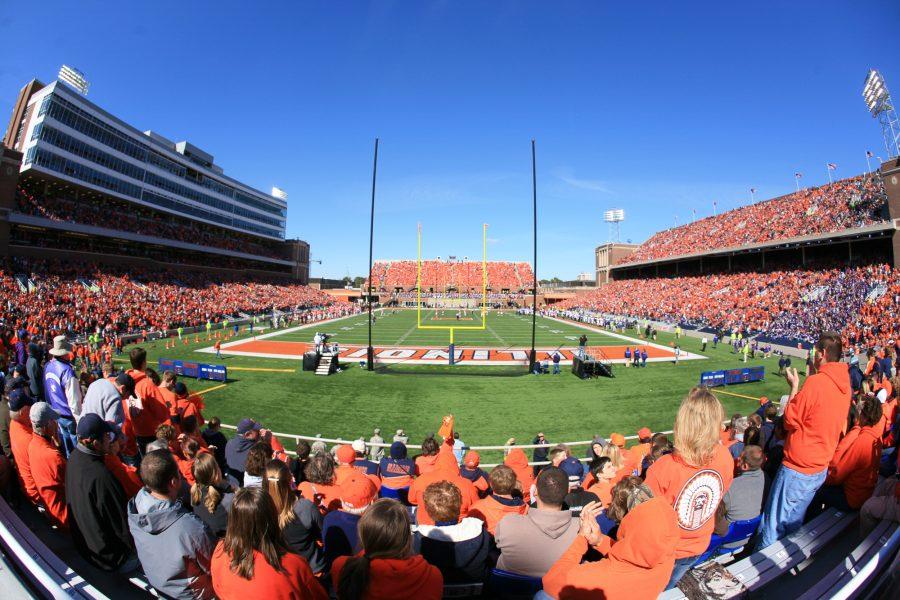 Memorial Stadium held 53,243 attendants during the 2011 Homecoming game against Northwestern at Memorial Stadium on Saturday, Oct. 1, 2011. The Illini emerged victorious with a final score of 38-35, keeping their 2011 season record to an undefeated 5-0.

Joe Spencer has been through it all since he became an Illini in 2012.

The senior offensive lineman has seen a handful of starting quarterbacks behind him, three head coaches come and go and a former teammate become involved in national scandals.

It’s been a long five years for the Ohio-native. Now in the twilight of his collegiate career, it all seems to have gone by way too fast.

“It just hits you all at once,” Spencer said. “There’s two games left, one game at home at a place that’s very special to me. It means a lot, and I just hope to go out on the right foot, not just for myself but for the seniors and for the program going forward. There will be a lot of different emotions going on.”

Spencer is one of 24 Illini seniors that will be honored on Senior Day when Illinois takes on Iowa for its final home game of the season Saturday afternoon.

This particular group of seniors has had to deal with more off-the-field drama than most. As the man hired to put the program back on track, head coach Lovie Smith finds it incredibly important to send his inherited seniors off the right way.

“You appreciate the senior class as much as anything,” Smith said. “That’s why it’s so important that we rise up and play our best ball. Where we’re at right now, we can’t do much about what’s happened in the past, but we can play our best ball this week, and we’re going to do everything possible to see that that happens.”

As a team in transition, Illinois hasn’t relied on its seniors as much it may have been projected before the season began.

Freshmen have taken over the secondary that was expected to be led by senior safety Taylor Barton. Senior defensive linemen Rob Bain and Chunky Clements have given way for younger guys to find their niche on the D-line. Quarterback Wes Lunt made his first appearance since Week Six when he took over for freshman Jeff George Jr. in the second half of the Wisconsin loss.

Even with less on-the-field impact, the seniors’ grace and leadership has been heralded by Smith and the coaching staff all season. Offensive coordinator Garrick McGee recognizes the crucial bridge that the team’s veterans have gapped between the present and future of Illinois football.

Although it isn’t reflected in the team’s record, Smith’s new regime represents a refresher for the program, and the current seniors have been part of the first step toward reclaiming relevance.

Senior linebacker Hardy Nickerson’ has been a part of that culture shift, and his single season as an Illini reminded him of his redshirt-freshman season at Cal when he was one of the youngest players on a struggling team in transition. He hopes his only year in Champaign can have a lasting impact.

“I want to be remembered as somebody that played as hard as he could, a smart player and just a guy that made plays,” Nickerson said. “I’ve been in the shoes of a lot of guys that are starting for us now and kind of building back the program.”

Spencer said he’s been through an “unprecedented” amount of changes during his five years as an Illini, but sees the program’s newfound stability as a way for the seniors to go out on a high note.

Being able to snap the ball to the same guy he has for the past three seasons in his final home game is the cherry on top.

“Wes and I have been through a lot,” Spencer said. “With him transferring in and everything that’s went on, it’ll mean a lot snapping to him. It’s a life-long relationship between me and him that I think will go on until we’re 65-plus.”

Lunt has never been as comfortable as Illinois’ starting quarterback as he is now, and lining up behind Spencer game-in-and-game-out has gone a long way for the soft-spoken signal-caller.

That’s the type of leadership Spencer has brought during his time at Illinois, and he’s just part of the massive senior presence that will be suiting up for the Memorial Stadium fans one last time.

“It’ll be different not putting the helmet on every Saturday or waking up for winter workouts at 5 a.m.,” Spencer said. “But there’s two left, and we’ll cherish those.”