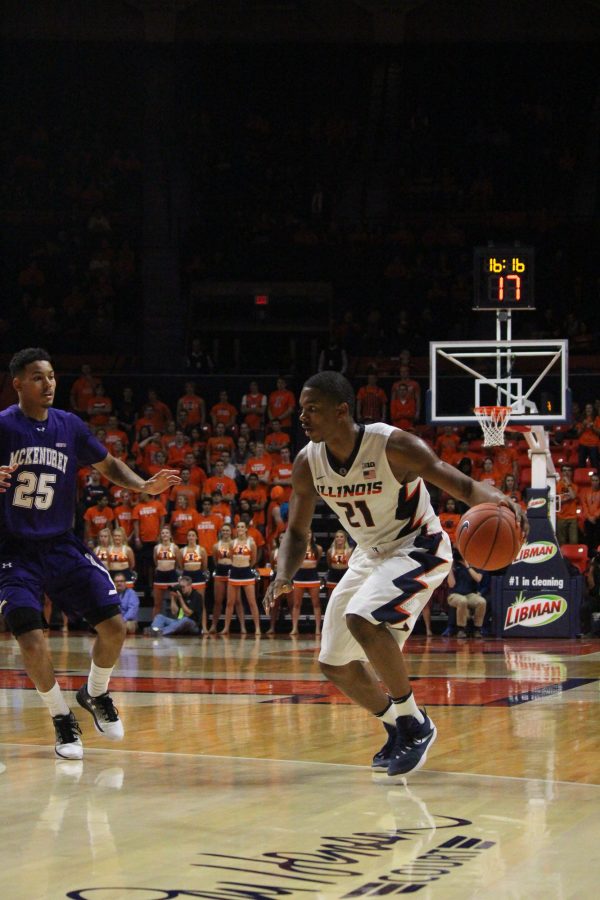 The llinois men’s basketball team was 4-0 heading into its game against Winthrop last Monday when Keon Johnson stepped onto the floor of State Farm Center.

Johnson, a point guard for the Eagles, had cramping in his legs the whole game. The Illini had trouble slowing him down amid the injury, and Johnson helped keep Winthrop in the game throughout the contest.

The Illini were up 70-60 with just under three minutes to play in the game and didn’t score another point in regulation.

Johnson accounted for seven of the last Winthrop points in regulation, helping his team force overtime. He continued Winthrop’s momentum into overtime, and the team defeated Illinois, 84-80.

The game started a three-game losing streak for the Illini.

The Illini then traveled to Brooklyn, New York, to take part in the NIT Season Tip-Off. The team took on West Virginia on Thanksgiving Day and were overmatched by the Mountaineer defense.

Michael Finke led the Illini with 13 points and Mike Thorne Jr. added 12 of his own.

The Illini then took on Florida State the next day in the third place game. The game was more competitive than the previous day’s contest, and Illinois trailed by three at halftime.

Malcolm Hill got back to his ways, using aggressiveness to get to the rim and taking more shots. The senior put up 18 points, going 6-for-13 from the field, but it was not enough. Florida State used a strong last 10 minutes of the game to win, 72-61.

The Illini will look to get a victory on Tuesday when they host North Carolina State in State Farm Center’s official dedication after three years of renovations.