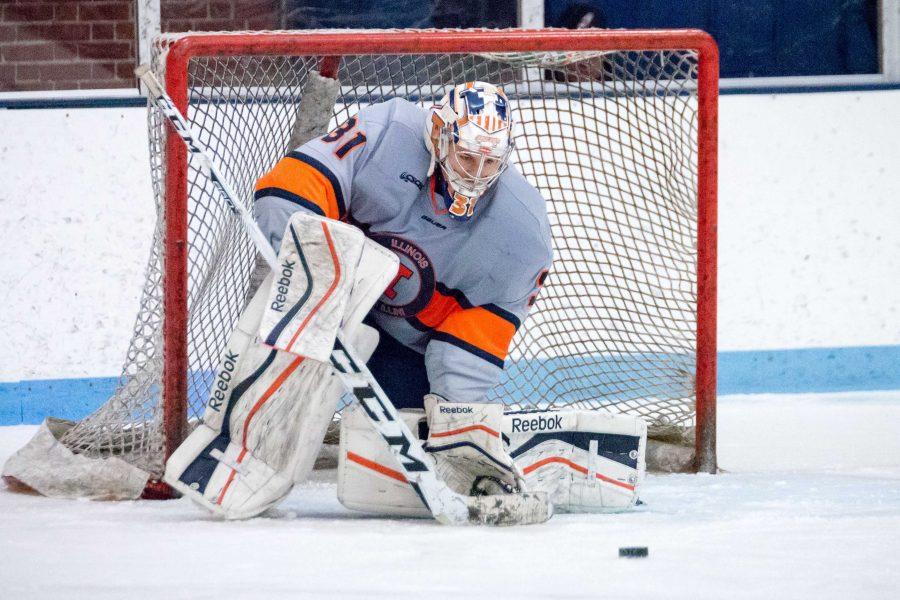 Illini won 4-3 in a shootout with a goal from Cruickshank on Jan. 22. Illinois is taking part in a feasibility study from the National Hockey League.

After ending the weekend with a shootout win at home, the Illinois hockey team took one of two games from reigning ACHA champions Lindenwood.

Coming into the series, the Illini had lost the previous two matchups to the Lions. The team continued its drought into the first game.

Lindenwood defeated Illinois 6-2, using four unanswered goals to seal the victory after the game was tied mid-way through the second period.

Head coach Nick Fabbrini believed that his team played better than the scorecards would lead some to believe, commending his team for continuing to stay on the attack.

“I thought (the game) went pretty well,” Fabbrini said. “Friday, the score wasn’t indicative of our play. We outshot them and had very good scoring chances, including a few breakaways.”

Saturday proved to be a nail-biter for both teams as the third period ended with the score knotted up at three apiece.

Illinois went into the third period with a two-goal lead, but Lindenwood struck quickly by scoring two goals.

The Lions finished the period with 21 shots on goal compared to Illinois’ four, attacking the net in the game’s final frame.

In the shootout, Illini goalie Joe Olen held Lindenwood scoreless, stopping all five of the pucks he faced. Center Eric Cruickshank knocked in the game-winning goal for Illinois.

Fabbrini was proud of the way his veteran goalie played, working through his previous hip injury which is now all but healed.

“We are very confident,” Joseph Ritondale said. “The (Lions) are always a top team, but with our recent success we are looking forward to the matchup.”

Fabbrini said he thinks his team will keep playing with the swagger it displayed over its recent stretch of games.

“When we get everyone going, I think we can be one of the best teams in the country,” Fabbrini said.

Indiana comes to town next for a weekend set of games.

The Hoosiers have been on a downslide of late after losing their last five in a row, including two 8-0 shutouts to Grand Valley State.

Fabbrini said he is not taking them lightly, treating the game as any other and expecting a win at the end of the day.

“We are going to have a couple of guys gone, so that means some different guys in the lineup and some guys getting opportunities,” Fabbrini said. “We want to win, so we are treating it like any other game and winning is the most important outcome.”