Hambly’s style and wins will be missed for Illini fans 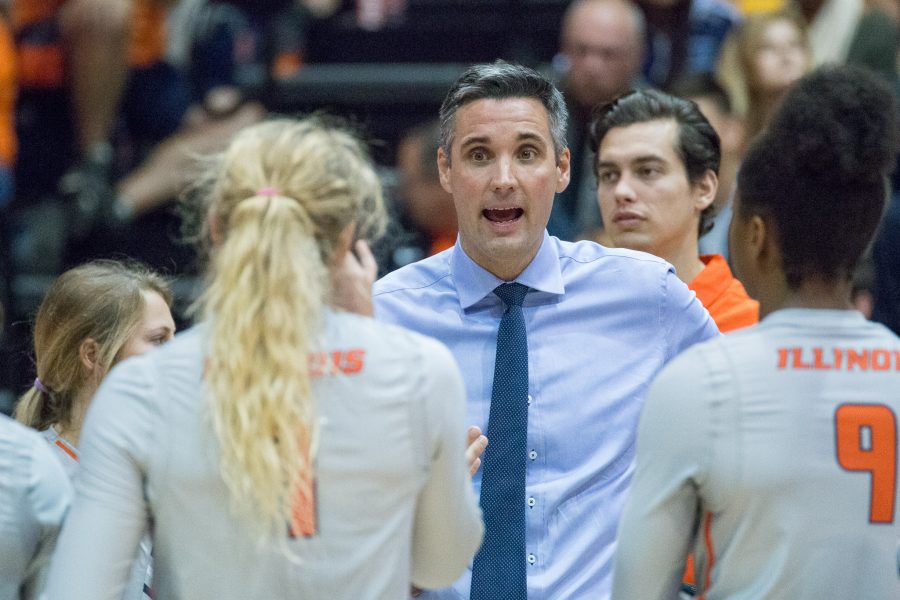 Illinois head coach Kevin Hambly talks to his team during a timeout in the match against Northwestern at Huff Hall on Saturday, October 15. The Illini won 3-0.

Kevin Hambly was the face of Illinois volleyball and one of the University’s most respected coaches.

As far as the media was concerned, especially student journalists, Hambly was also extremely intimidating.

But we’ll get to that in a minute.

And his departure came as a surprise to many.

But it’s one that makes sense. Stanford is currently the best team in the nation, and Hambly is from Simi Valley, California.

Next to football and men’s basketball, volleyball is Illinois’ top grossing sport.

Basketball and football might have gotten the most media attention these past years, but volleyball has always been the most consistent of these three.

Hambly only had one losing season as head coach, and that’s only talking about the numbers.

Crowds have packed Huff Hall throughout the years to help cheer on the Illini. Next to Block I and Orange Krush, Spike Squad, the team’s student section, is always one of the fullest.

Promotional events like “Stuff Huff” and IlliNOISE Night” brought crowds in the thousands. Hambly has coached at 13 of the top 20 all-time Illinois crowds, including all four of the 4,500-plus crowds ever recorded.

The games are exciting, back-and-forth and full of athleticism. Plus, the Illini typically win — a change from Illinois’ rather dismal athletic record over the years in other sports.

Hambly managed to put women’s sports both in the headlines and in the hearts of Illini fans.

In eight seasons at Illinois, Hambly went 178-86 and made six trips to the NCAA tournament, including the 2011 national title match – the school’s first appearance ever. Twelve All-Americans played for Hambly during his time at Illinois.

But off the court, he was always the coach you were most afraid to screw up an interview with as he protected his players and decisions with a passion unlike others.

His relationship with the media was like that with the teams he played — he tore them apart if they showed weakness, knowing when they weren’t sure what they were talking about.

But he’s a damn good coach and if you got to know him and he respected you, it was a healthy journalist-coach relationship. And the journalist got better moving forward.

It’s that style that will serve him well going forward.

That’s a lot to live up to.

But if he does anything like he did at Illinois, he’ll be in good shape and intimidating Stanford’s student media along the way.