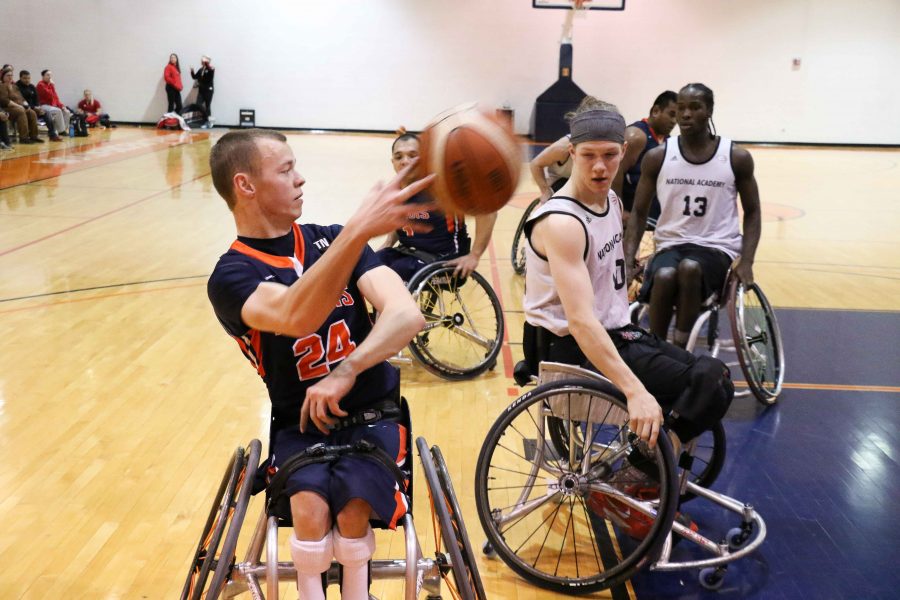 Illinois’ Spencer Heslop passes the ball in the tournament against Canadian Academy on Saturday at the ARC.

Head coach Matt Buchi looked over to his left and pulled out an imaginary bow from his back.

He aimed it at Patrick Tomic, who was sitting on the opposite side of the bench, and pulled back his right arm in the direction of Tomic. Tomic, then playing off the fun, then fell back and flailed on the ground.

The stunt, which happened twice after Illinois hit a pair of shots in front of its bench, came during the team’s second game against the Canadian National Academy over the weekend. The Illini went on to win the game, 64-40, and finished the tournament at 3-1.

“We came into (the home series) with the concept of, we are just going to be consistent in what we do and just work and go at it one possession at a time,” Buchi said.

In addition to the two wins against Canada, the tournament was highlighted by Illinois’ first win over the Milwaukee Bucks this season.

The Bucks, an elite-level team in the National Wheelchair Basketball Association (NWBA), have several Paralympians, including 6-footer Nate Hinze and scoring threats Rebecca Murray and Jeremy “Opie” Lade. The trio, led by 51 points from Hinze and Murray, played a key role in the team’s win over Illinois on Nov. 13 at the Second City Classic in Chicago.

But in their second matchup against the Illini, Lade was out coaching the USA U23 Team in Argentina.

It forced Hinze, who could often be seen swinging his arms in frustration, and Murray to shoulder most of the responsibilities for the Bucks.

“We know our roles with (Lade) in the game, so this has tested us to go a little bit outside of our roles,” Murray said. “A lot of us handled the ball more than we normally would.”

Hinze and Murray finished with a combined 18 points. They also took 22 of the team’s 34 field goal attempts.

Illinois, despite being without the injured Tim Nagel, saw a 29-point game from Spencer Heslop. He also had nine rebounds and three assists, which is more than Hinze and Murray had all game.

“Spence had a game that he shot out of his mind,” Buchi said. “That really helped us out, kind of boost our offense.”

Tomic, who did not score in the game, said he felt Hinze’s production was kept to a minimum.

“It was awesome to see how well we were able to push out Nate Hinze (out of the paint) to make sure he got the least amount of looks as possible,” Tomic said.

The Illini will play again next weekend in Edinboro, Pennsylvania. A sequel to the bow-and-arrow stunt has yet to be seen.