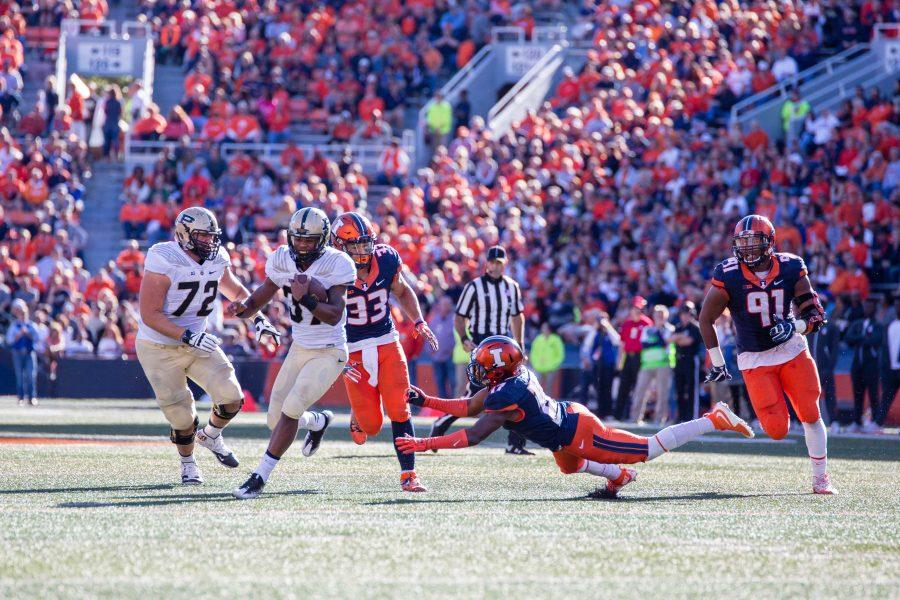 Illinois defensive back Stanley Green (17) dives after Purdue running back Brian Lankford-Johnson (37) during the game at Memorial Stadium on Oct. 8, 2016. The Illini lost 34-31.

The Illini currently have 21 commitments. Four of those — Del’Shawn Phillips, Owen Carney Jr., HoJo Watkins Jr. and Carmoni Green – have already enrolled at the University and begun working out with the team.

National Signing Day is typically the first Wednesday in February. It is the first day that a high school senior can sign a binding National Letter of Intent with a NCAA program.

Smith’s first recruiting class is remarkably better than the makeshift class put together by interim head coach Bill Cubit in 2016. The Illini have three four-star commits, as ranked by rivals.com. Two of those commits are Green and Carney.

Illinois had 25 commitments in 2016 but not one four-star signee.

Dwayne Lawson and Cameron Thomas are dual-threat quarterbacks. Lawson, a junior college transfer, and Thomas, a senior at Marian Catholic High School in Chicago Heights, Illinois, will be competing for the starting quarterback job in August.

Smith faced the challenge of replacing the defensive line and linebacking core after the graduation of Dawuane Smoot, Carroll Phillips and Hardy Nickerson Jr.

Carney, Del’Shawn and three-star defensive tackle Kendrick Green will be tasked with filling that void. Green chose Illinois over offers from Central Florida, Iowa and Minnesota.

Some Illini commits, like offensive lineman Larry Boyd, have made it clear on social media that they will be considering no other school on National Signing Day.

Boyd, a St. Louis native, reconfirmed his commitment to the University last week.

Rivals.com ranks Illinois’ 2017 class as the 43rd-best in the country.

Smith will host a press conference at 2 p.m. on Wednesday. A public event will be held at the Alice Campbell Alumni Center at 6 p.m. on Wednesday as well. Smith, athletic director Josh Whitman and other football staff are slated to speak about the newest members of the Illini football team at the event.