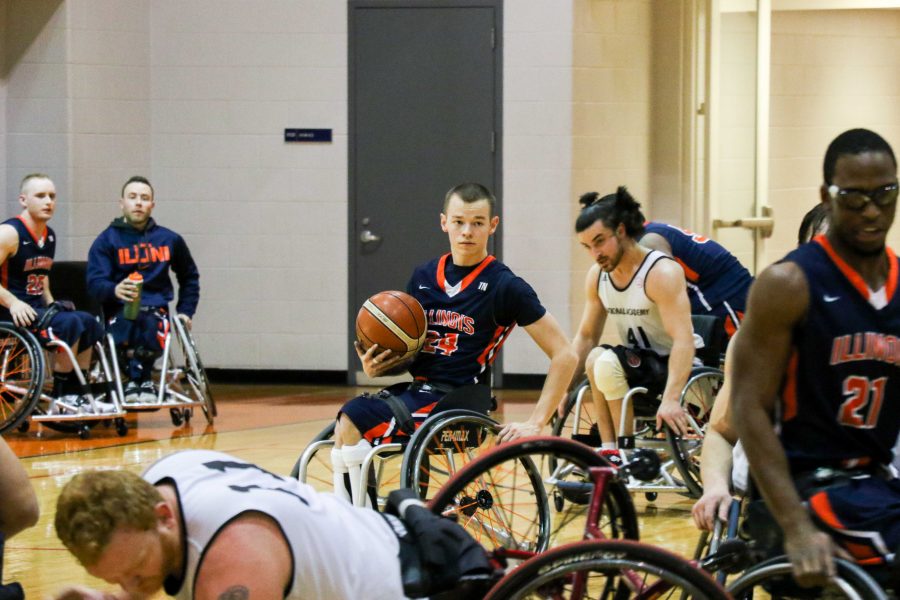 The Illinois men’s wheelchair basketball team has won five of its last seven games and is coming off a tournament in which it beat the experienced Milwaukee Bucks for the first time this season.

Illini head coach Matt Buchi will look to carry their momentum to an intercollegiate tournament this weekend in Edinboro, Pennsylvania. The team will play four games at Edinboro, which is the home of rubberized courts and the 2016 National Tournament.

“We’re at a good spot, just fine-tuning some things,” Buchi said. “We’re really working on getting major reps in our offensive and our defensive set.”

Illinois’ third game in the tournament will be against Wisconsin-Whitewater. Whitewater, known for its aggressive play, a pair of bigs — in Christian Seidel and David Fleming — and boisterous “War-hawk” chants, have beaten Illinois twice this season.

“If we can have lockdown defense, that is what’s going to win us ball games,” junior Spencer Heslop said after the loss.

Though the Illinois-Whitewater match on Jan. 14 was canceled for icy conditions in Wichita, Kansas, senior Patrick Tomic said he has found holes in Whitewater’s play.

“Whitewater is beatable,” he said, adding how important it is to keep its bigs’ out of the paint. “When we do that, they can’t get anything on offense.”

Buchi said the team is now more focused on its technicalities.

“I think we can get a little lackadaisical once we get a couple of good offensive possessions that we feel comfortable with and (are like), ‘Oh yeah, that’s just the flow of the offense,’” he said. “We got to be a little more consistent and disciplined.”

Illinois heads to Edinboro on Thursday afternoon, and the first game will be against Missouri at 10:30 a.m on Friday.