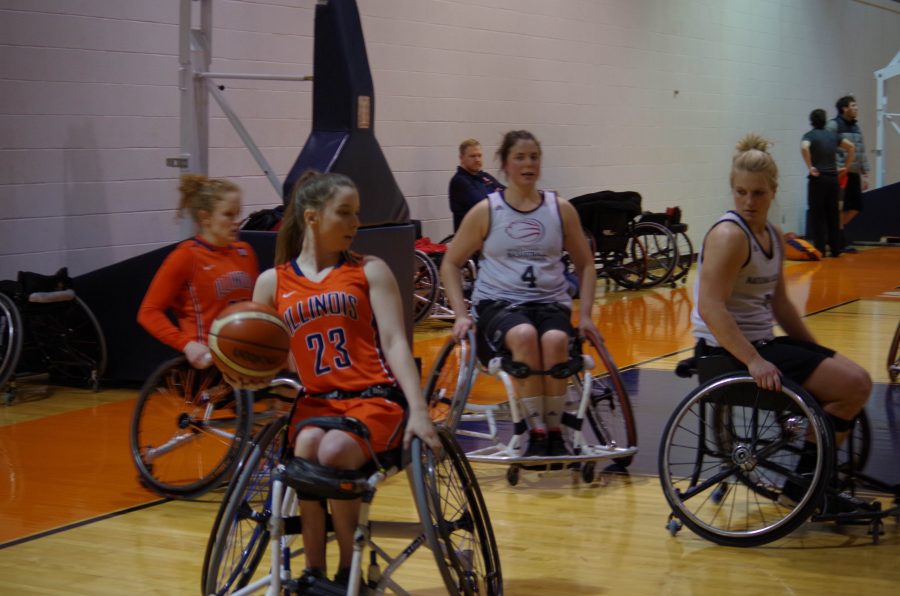 Illini’s Erica Wilson takes the ball around to the basket against the Canadian National Academy in the ARC on Friday, Jan. 27th.

The Illinois women’s wheelchair basketball team is coming off a tournament in which players’ mistakes were audibled.

During the team’s second game against the Canadian Academy Team last weekend, freshman Erica Wilson and senior Chelsea McClammer were yelled at by either senior leader Kaitlyn Eaton or head coach Stephanie Wheeler for making mistakes on offense.

Both McClammer — who started in place of the sidelined Christina Young — and Wilson, an everyday starter, are two of the least experienced players in the starting lineup. It was especially evident on defense, and Canada took advantage of Illinois’ openings in the paint to score.

Illinois lost both games by 25 and 38 points, respectively.

A week after the losses, Wheeler wants her team to progress, especially with attacking on offense for the four-game road trip to Edinboro, Pennsylvania, this weekend.

“If we do those things we’ve been working on in practice, that to me is all I ask of the team,” Wheeler said.

The games at Edinboro will be played on a surface similar to the courts at Whitewater, which were made of a rubberized material, creating more friction between the chair tires and the court than on a hardwood floor. As a result, wheelchair users have to push their tires harder.

Young also said after games at Whitewater in the fall that the rubberized material can be flung around by the ball and players’ tires. She said some got in her eye during a game.
Illinois will start their four-game circuit in Edinboro on Friday, when it will play Whitewater.