Beasley shows promise, lively personality on, off the court 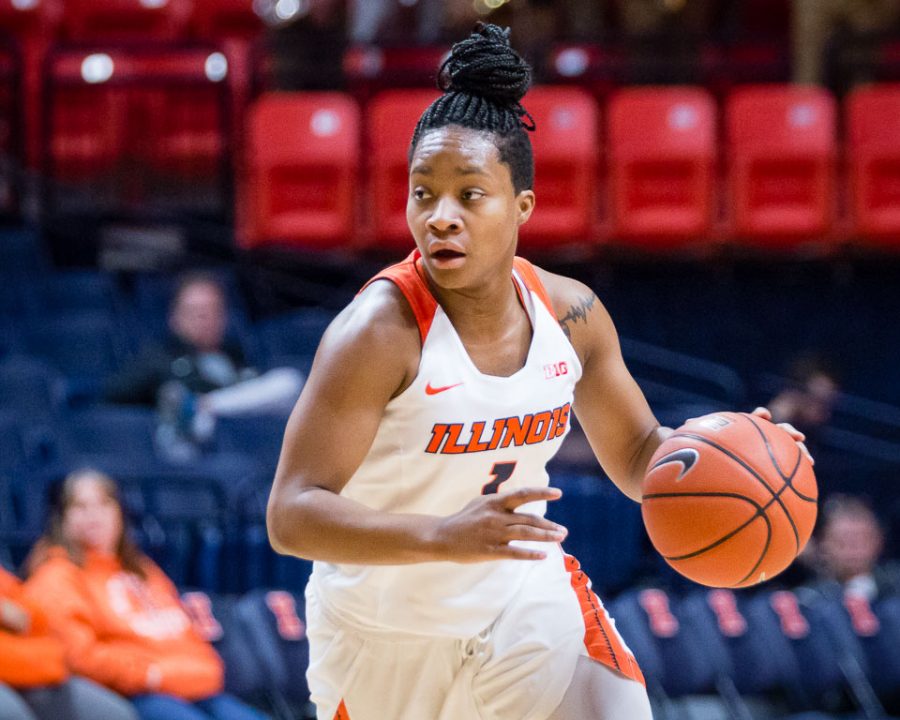 Illinois’ Brandi Beasley (1) dribbles the ball at the top of the key during the game against Maryland at State Farm Center on Thursday, January 26.

Before practice, Brandi Beasley takes a seat on the sideline at the Ubben Basketball Facility. She is one of the first players to show up, and besides the voices of media members and an Illinois women’s basketball team representative, the gym is quiet.

Beasley relaxes on a chair, sporting sweatpants and sandals with her hair in her trademarked bun. She looks comfortable and at ease.

The freshman guard prepares to do an interview, but before she begins to speak, she pulls a scone out of her pocket.

The seemingly random act sparks a light conversation with the media, but Beasley simply laughs it off. No one would have guessed she likes scones, but that’s who Beasley is.

Off the court, her personality seems a bit abstract and unpredictable. At one moment, she could be dancing down a hallway at the State Farm Center, the next cracking jokes with her teammates.

“I’m really kind of shy,” Beasley said. “A lot of people don’t know that, but I don’t know, I guess it’s just my personality. I don’t think you should just be stone-cold, just hard like this wall right here. I don’t like to be stiff. I just have to loosen up in order for my game to flow.”

Beasley’s game has flowed all throughout her freshman campaign, and although she considers herself to be an introvert, nothing about her game is reserved.

The Illinois freshman has started in every game of her career thus far and is averaging 15.6 points, 5.1 rebounds and 4.3 assists per game in conference play.

She also leads the team in minutes played per game and anchors Illinois’ perimeter defense. Beasley has recorded 41 steals so far this season and has guarded some of the top guards in the Big Ten, including Ohio State’s Kelsey Mitchell and Michigan’s Katelynn Flaherty.

Her breakout performance came on the road against Penn State. At Bryce Jordan Arena, Beasley recorded a career-high 28 points and chipped in seven rebounds and five assists against the Nittany Lions. Illinois lost 82-66, but Beasley made it clear she was not afraid of the moment.

She followed up her performance with another strong one against Michigan. The Illini were win-less again, but Beasley scored a team-high 21 points to go along with six rebounds and three assists.

Head coach Matt Bollant has praised Bealsey for her offensive progression throughout the season, but this isn’t the first time he has seen her dominate the competition.

“The first time I saw her it was like wow-ing,” Bollant said. “A high school friend of mine in Tennessee said this kid’s really good. And (when) I got tape of her, I’m like ‘oh, she is good,’ and got her to come up and visit. I got a chance to watch her in person and was just really impressed every time I saw her.”

At Ridgeway High School in Memphis, Beasley led her team to the 2014 Division I Class AAA girl’s basketball state title game. Beasley scored a team-high 16 points, but it wasn’t enough to knock off Blackman. Even in defeat, Beasley was still named to the all-tournament team.

Beasley said that getting her team to the state final was the proudest moment of her high school career — a moment that almost never happened.

Before becoming one of the top guards in Tennessee, Beasley was not allowed to play basketball. Her mother thought the sport was too rough for her pint-sized daughter, so instead, she enrolled her in gymnastics and cheerleading.

Beasley said she enjoyed flipping and cheering, but in third grade, she fell during cheerleading practice and broke her elbow. It was then that her mom decided to let her play basketball.

“My mom was like, ‘If you can get hurt in cheerleading, then you might as well play basketball,’” Beasley said. “I think I always loved it though. It was something that I’ve always enjoyed doing, and I was pretty good at it. So (I thought), ‘I like it. Why not stick with it?’”

The 5-foot-6 guard continued to improve her game and when it came down to where she wanted to play in college, the decision was between Illinois and Arizona.

Beasley said she ultimately decided to come to the Midwest because of the relationships she built with Bollant and his coaching staff.

“I was at my aunt’s house,” Beasley said. “We were just sitting in the living room, just talking or whatever. And I got a call, and I didn’t know who it was. So when I answered the phone and he told me who he was, I stepped outside. I wouldn’t say I wasn’t interested, but I never thought about coming here.”

Over a year later, the former three-star recruit seemed to have made the right decision. In her first game at Illinois, she drove to the basket against Drury University and scored the first points of the season for the Illini. She hasn’t slowed down since.

Alongside sophomore Alex Wittinger, Beasley has emerged as one of the most consistent players on the team. But beyond that, Bollant believes Beasley has potential that goes farther than being one of the best Illini.

He said that her decision-making, along with her on-ball defense and endurance, has turned her into one of the best young players in the conference. And when the season is over, he thinks she will be in the running for Big Ten Freshman of the Year.

Beasley has some personal goals for herself, but she didn’t come here for the individual accolades.

She still remembers the sting of losing the state championship and made it clear that she wants team success more than anything.

“(Winning) championships,” Beasley said. “I think that’s everybody’s goal. Whether it’s a conference championship or a national championship, whatever that may be, but a championship.”