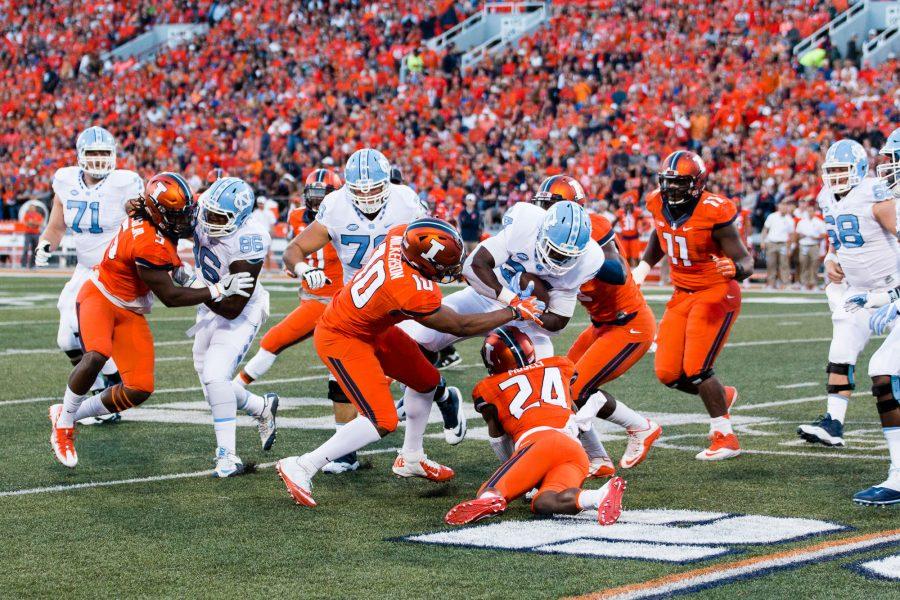 Illinois linebacker Hardy Nickerson (10) tries to strip the ball from North Carolina tailback Elijah Hood (34) during the game against North Carolina at Memorial Stadium on Saturday, September 10. The Illini loss 48-23.

The Illinois football team will play another Friday night game next season.

The American Atlantic Conference announced Thursday that Illinois’ Sept. 15 matchup against South Florida will be played in primetime.

Kickoff time has not yet been determined, but ESPN has picked up the contest.

The game will be held at Raymond James Stadium in Tampa, Florida, — home of the Tampa Bay Buccaneers. Illinois head coach Lovie Smith spent two seasons as the Buccaneers head coach before coming to the Illini.

This will be the first of two Friday night games for the Illini next season. The team will host Nebraska on Sept. 29.

Illinois had one primetime game last season against North Carolina. The Tar Heels defeated the Illini 48-23, but a sellout crowd of 60,670 people attended the game. This was the first sellout since the Illinois hosted Michigan in 2011.

The Illini begin their season at home Sept. 2 against Ball State.