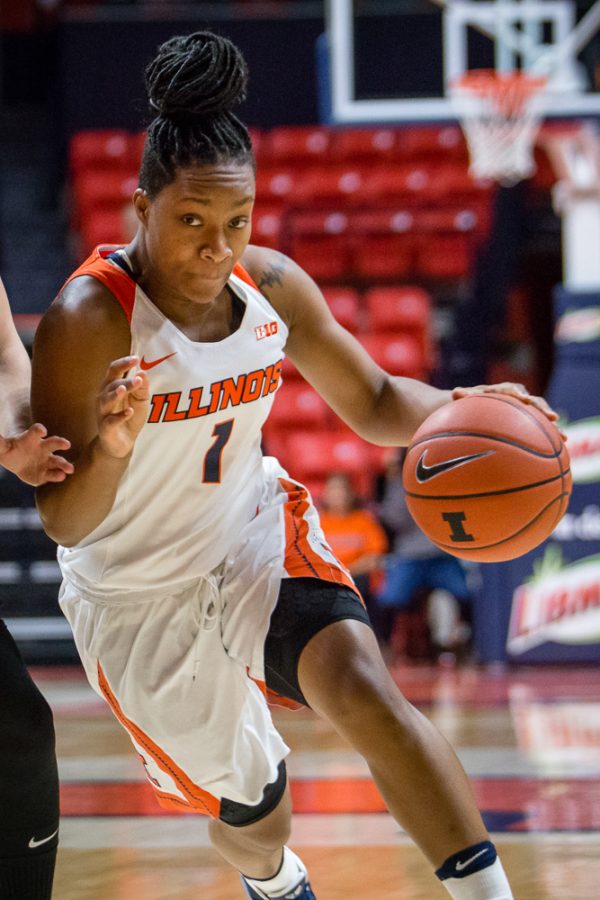 Illinois’ Brandi Beasley (1) drives to the basket during the game against Wake Forest at State Farm Center on Wednesday, November 30. The Illini lost 79-70.

Fast forward a few months, and Illinois women’s basketball’s starting guard has scored at least 20 points in her last three games, making her the Illini’s leading scorer in conference play.

Beasley is averaging 15.6 points in Big Ten games, slightly higher than sophomore forward Alex Wittinger’s 15.4 points, and is first in the Big Ten in minutes played per game.

Beasley said she has thought about the possibility of being named Big Ten Freshman of Year, and added that even being mentioned in the conversation is a testament to her work ethic.

“I feel like I work pretty hard,” Beasley said. “I just go out there and give it all that I have. I don’t really expect anything from it.”

Head coach Matt Bollant has praised Beasley all season long for what she brings to the team defensively. She leads the teams in steals, but after her 20-point outing against Purdue, Bollant said that Beasley has the potential to play professionally.

On Big Ten Media day back in October, Bollant was clear that Wittinger was the team’s leader.

Twenty-four games into the season, Illinois’ starting forward has lived up to the hype. She averaged 10 points last season and nearly seven rebounds per game. But this season, Wittinger has increased her scoring and rebounding to 15.1 and 8.6, respectively. She has also recorded 58 blocks – eight more than she tallied all of last season.

Freshman guards Beasley and Petra Holesinska have emerged as two of the team’s most consistent players. Beasley has played every second of Illinois’ past three games and is shooting 48 percent from the field. The 5-foot-6 guard leads all Big Ten freshmen in rebounding and has recorded a team-high 96 assists so far this season.

Holesinska hasn’t been as consistent as Beasley, but she has emerged into the Illini’s top three-point threat. The sharpshooter has knocked down a team-high 39 threes this season, including a career-high five in Illinois’ most recent game against Purdue. Holesinska is currently third on the team in scoring and rebounding at 10.1 points and 4.1 rebounds per game.