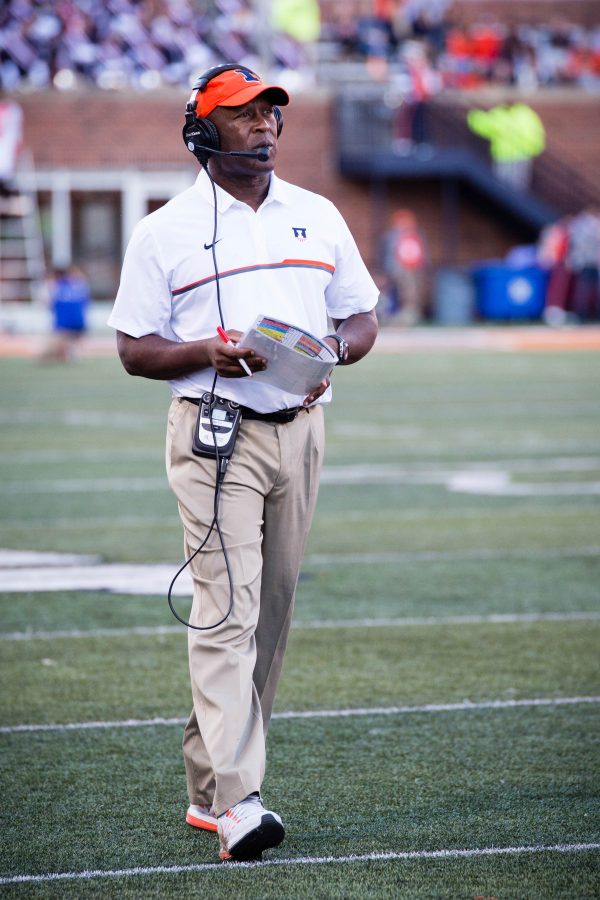 There are several major storylines surrounding Smith and his team entering spring ball. Here are the top five.

1. Coaching staff positions yet to be filled

“Young people are mobile, and that is a great opportunity for Tim to work with a great organization,” Smith said. “That’s part of what happens when you have good young coaches.”

Smith said he expects the position to be filled by the start of spring ball.

“We went through a cycle, and we felt like we needed to make a move,” Smith said.

Smith said there are benefits with recruiting and finding a routine with starting spring practice nearly two months earlier.

“Last year, we were late with our spring recruiting,” Smith said. “This year, we can get a jump start on that. Our players can transition back into offseason workouts.”

Illinois welcomes the public to its spring practice on March 4, in lieu of a spring game.

3. Quarterback situation is unclear after graduation of Wes Lunt

In a familiar tone to press conferences as the headman of the Chicago Bears, Smith announced junior Chayce Crouch is currently the starter for next season.

“Chayce is our quarterback,” Smith said. “We need to see what we have behind him.”

Behind Crouch, who is currently injured and will be limited in spring practice, is Jeff George Jr.

Dual-threat quarterback and Hutchinson Community College’s Dwayne Lawson is expected by many to be the starter against Ball State on Sept. 2. But, Lawson has not signed his Letter of Intent and will likely not enroll at the University until this summer.

Running back Dre Brown and wide receiver Mike Dudek have each been sidelined the past two seasons with a pair of ACL injuries.

Illinois needs both players healthy this season following the transfers of wide receiver Desmond Cain and running back Ke’Shawn Vaughn.

“If there’s a player that wants to transfer, I’m not stopping anyone,” Smith said. “I want guys that want to be here.”

5. Smith looking for Foster to step into leadership position

Smith expects senior running back Kendrick Foster to step into one of those positions, beginning during spring ball.

He called Foster an ambassador for the University and said the senior helps in recruiting.

“Everything we have asked [Foster] to do, he has done,” Smith said. “He has earned everything he has gotten. We expect more things from Kendrick Foster this year.”