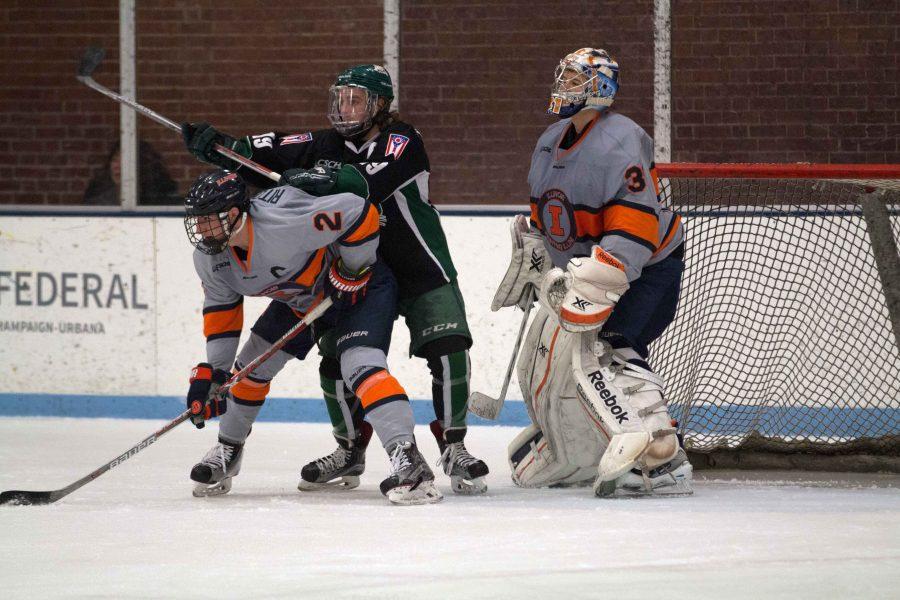 Joey Ritondale (2) fights off Ohio's forward at the Ice Arena on Saturday. The Illini fell to Ohio, 4-1.

With 1:18 remaining in the third period Friday and Illinois up 5-4 on Ohio, Illini defenseman Aaron Dusek took a two-minute minor penalty for slashing.

The senior sat in the penalty box with his head between his legs. His penalty allowed one of the nation’s most potent power-play units a chance to tie up the game.

Ohio’s Tom Pokorney was called for an interference penalty minor with less than one minute to play, ending any chance of a Bobcat comeback.

Forward Garrett Jenkins netted a goal after an Illinois miscue by not successfully clearing the puck.

“I thought that we played a pretty good period all things considered,” Illinois head coach Nick Fabbrini said. “A little unlucky to be down 2-0, but one was a pretty bad turnover by us, and we can’t turn pucks over against good teams.”

Illinois scored three goals in a four-minute span during the middle of the second period. The second line of forwards Eric Saulters, Bobby Ernsting and Luke Forfar tallied two goals in the frame.

“(We’re) just trying to get pucks to the net,” Saulters said. “We want to create opportunities and test this goalie.”

That goalie was freshman Jimmy Thomas, who allowed two more third period goals as Illinois came away with a 5-4 victory. The Illini improved to 19-8-3.

Ernsting had two goals, including the game-winner with 5:05 left in the third.

“It means a lot coming in and beating the No. 2 team in the country,” Ernsting said. “We knew it would be tough, and we’d have to pay the price, but we came together and came away with a team win.”

Ohio (24-5-1) picked up a 4-1 win Saturday to split the weekend and season series. The Bobcats and Illini also split a November series in Athens, Ohio.

Ohio scored three goals in the third period to break a 1-1 tie.

Olen did not start the first game because he returned from the World University Games in Almaty, Kazakhstan, on Thursday. Fabbrini, forward James McGing and defenseman Tyler Opilka also represented the U.S. team.

Illinois wraps up its regular season this weekend in a series against in-state Central States Collegiate Hockey League opponent Robert Morris at the Illinois Ice Arena.