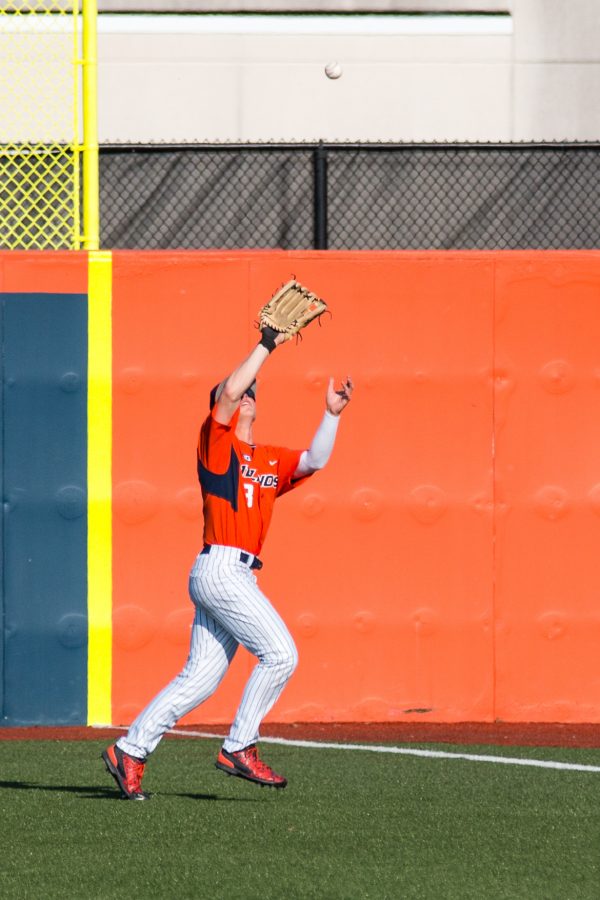 Illinois right fielder Jack Yalowitz gets ready to catch a fly ball during game two of the series against St. Louis University at Illinois Field on Saturday, April 16. The Illini won 3-1.

The Illinois baseball team is made up of 34 players, varying in age.

This is normal for any college baseball team, but what is unusual is that only six of them are seniors and only 13 are upperclassmen.

However, despite the number of young team members, head coach Dan Hartleb is confident in his team’s ability to contend this year and in the years to come.

“Once we step on the field, we’re baseball players,” Hartleb said. “You can’t worry about a situation where you have played or haven’t played … The bases are 90 feet, and it’s 60 feet and six inches to the mound.”

It is not just Hartleb that thinks age will be a non-issue. Sophomore outfielder Jack Yalowitz — one of the most experienced underclassmen in the group — said that his team is full of talent.

“There’s no age in college baseball,” Yalowitz said. “There is no freshman, sophomore, junior, senior. We’re all college guys just playing baseball together at the same level.”

That being said, even the younger guys such as Yalowitz, Cole Bellair, Doran Turchin and more, have all gained valuable experience. Yalowitz said that even though he is just a sophomore, he sees himself as one of the more vocal leaders on the team and tries to be someone the freshmen look up to.

These experiences should help prove that even though the Illini look young on paper, they are not an inexperienced team by any means.

The off-season means a lot of different things for different teams. Hitting, pitching or fielding are often the biggest focus, but for Illinois, this off-season was spent improving its team chemistry.

Yalowitz said that aside from practice, he and his teammates have been making a conscious effort to spend as much time together as possible before the start of the season.

Yalowitz said that they routinely got together for things such as the MLB playoffs, the Super Bowl and more to make sure everyone was on the same page.

Hartleb also added that the process does not focus solely on the younger players but also relies heavily on the upperclassmen.

“I really like the way they’ve stepped up and some of the things they’ve done for the younger guys,” Hartleb said. “They’re very very good people, and they’re role models.”