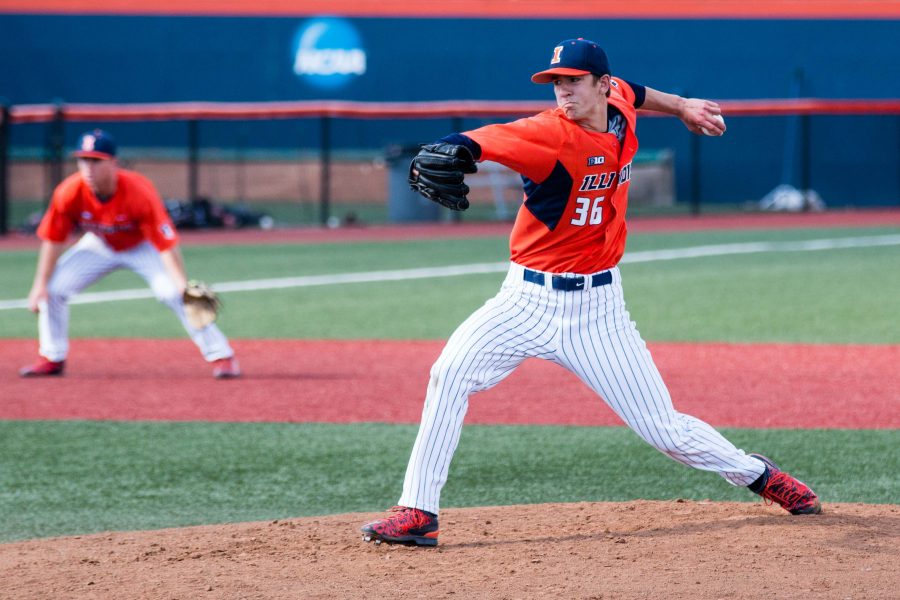 Then, senior Jason Goldstein followed two batters later with a double down the third-base line to score Yalowitz and put the Illinois baseball team ahead early against Illinois State.

A pinch-runner replaced Yalowitz after he was walked later in the game, but head coach Dan Hartleb knew he may have found a new leadoff hitter.

The Illini defeated the Redbirds 7-1 that day, and Yalowitz kept his spot in the order for 17 more games that season.

The freshman posted a .293 batting average with runners in scoring position to go along with 10 two-out RBIs last season.

“I definitely do like leading off and setting the tone,” Yalowitz said. “I think Doran (Turchin) would be capable as well of doing that (this year) as well, but it’s definitely a very important position, especially because last year our offensive productivity was kind of low.”

Yalowitz and the Illini will begin their season Friday against Milwaukee-Wisconsin in Beaumont, Texas. The two teams will meet again on Saturday.

Hartleb said he is excited to see what his other young players can do for his team this year.

“We’re going to go out and learn a lot of things these first few weeks,” Hartleb said. “Hopefully two or three weeks down the line, we’re going to be able to make intelligent decisions and get guys in positions to help us really win.”

Despite the team’s plentiful talent, it is hard to ignore the lack of age and experience throughout the group.

The Illini’s youth will be reflected on the pitching mound. The team has lost two pitchers to MLB first round draft picks within the last two years.

Doug Hayes was the Illini’s No. 2 starter last season and returns this year, looking to take the role as the ace of the staff. Hayes went 6-5 with a 3.58 ERA last season.

Luke Schilling will also be in the mix for more innings. The right-hander competed in the Northwood League over the summer, posting a 2.76 ERA in 39 innings.

Sophomores Cole Bellair and Quinten Sefcik are also in the mix for starting positions.

Senior Pat McInerney will lead the heart of the order for the Illini. The first baseman batted .301 with an .829 OPS last year.

Following McInerney in the order will be Turchin, who will add versatility to the Illini again this season. The sophomore hit in seven different spots last season to go along with four home runs.

The team began last season’s campaign with two losses to Tulane, but Hartleb said he has distinct expectations for his team this season.

“My expectation for us is to go out and play clean baseball and have an opportunity to win toward the end of the game,” Hartleb said. “If you have those expectations before it’s all said and done, then you’ll find ways to win.”

Milwaukee is coming off a 32-26 year. The Panthers won their opening game against Valparaiso in the Horizon League Tournament but then eliminated after dropping two-straight games.

The Illini will stay in Texas for two more games against Lamar this weekend. Lamar boasted a 35-19 record last season and lost both its games in the Southland Conference Tournament.