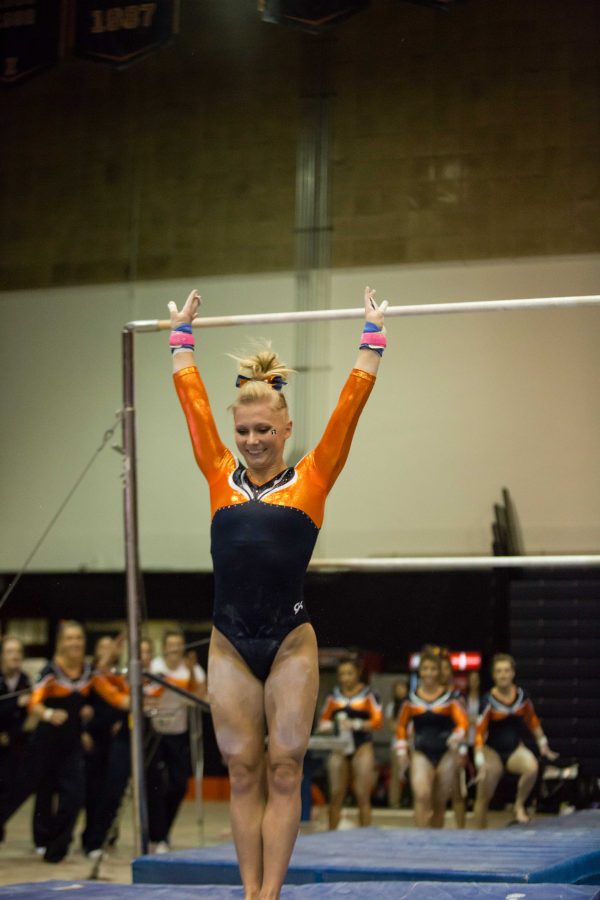 Illinois’ Erin Buchanan lands successfully after performing a routine on the uneven parallel bars during the State of Illinois Classic at Huff Hall on Saturday, March 5, 2015. The Illini claimed victory for the ninth consecutive year with a total of 195.425 over Northern Illinois (194.225), UIC(192.625) and Illinois State (191.500).

Head coach Kim Landrus said that her greatest memory of the senior class is watching their progression and development from their freshmen to now.

This will be the team’s final meet at Huff Hall for seniors Erin Buchanan and Sarah Lyons.

“When I think about the fact that my time as a gymnast is almost over, it makes me a little emotional, but I’m a bit more prepared than I anticipated,”Buchanan. “It is a sport that I’ve done for nearly 15 years, so it’s going to be a rough change, but I’m ready for the next track of my life.”

Beyond the special night for the graduating gymnasts, the Illini have more conference competition approaching after snapping its losing streak in Iowa.

“We’re just a bit tentative,” Landrus said. “We have to be more aggressive with everything we do. Some of the small errors that we made won’t happen if we are more aggressive and take a different approach.”

The Illini are halfway through their season.

Freshman Karen Howell said that she, along with her teammates, have seen many accomplishments come from this team but feel that as a whole can be great by the time bigger meets — Big Ten Championships and NCAA Regionals — come.

“We need to focus on landings,” Howell said. “I know personally that’s my biggest hiccup. Fixing that will help our score and our placement in the competition. We’ve been working on different events, but fixing our entrance on vault and making everything bigger will boost the team’s scores.”

The Illini have had difficulties with the vault competition, especially for Buchanan, who has been consistently tallying 9.7s and occasionally 9.735s this season.

“Vault is the most important event that I need to work on,” Buchanan said. “Being confident in my landing is the only issue but still something that’s holding me back. Landings, in general, is something we need to work on as a team to get better and to put up higher scores.”

This competition will be Illinois’ last meet at Huff Hall but not its last meet in Champaign — the team has two meets at State Farm Center later in the season.

“We’ve gotten all of the technical stuff down,” Howell said. “Soon we’ll be at the point we need to be, we’re almost there.”