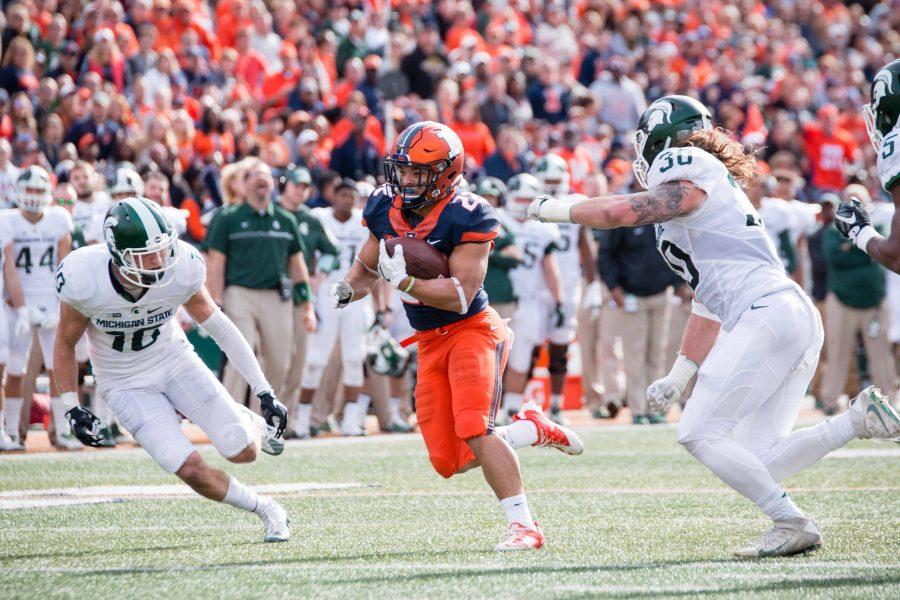 Illinois running back Kendrick Foster runs for a touchdown against Michigan State on Nov. 5. Foster, along with other seniors, is excited about leadership opportunities.

The second spring practice of 2017 for Illinois football began outside in Memorial Stadium but moved into the Irwin Indoor Practice Facility due to cold temperatures.

As coaches began fulfilling media obligations and players funneled out of the building after practice, wide receiver Malik Turner strapped on his helmet and continued running routes for 26 more minutes.

The senior was the final player on the turf practice field.

“I’m just making sure that I hold everybody accountable,” Turner said. “I need to take care of myself as far as doing all of the right things.”

Head coach Lovie Smith and his staff will look to Turner and other offensive weapons, like senior running back Kendrick Foster, to lead the team again this season.

This group of seniors will also need to step up in leadership following the graduation of the team’s four captains.

In a press conference prior to the start of spring ball, Smith called upon Foster to become a leader.

Foster said he has already felt like a leader, but he has accepted Smith’s challenge.

“Just being a senior doesn’t mean I’m leading,” Foster said. “I’ve been leading since I was a freshman, behind the scenes. Now, I have a better perspective, and people are looking at me.”

Illinois’ backfield, led by Foster and senior fullback Nathan Echard, is one of the most experienced on the team this spring. Seven of the eight running backs are at least a sophomore.

Echard said the veteran backfield has gained an understanding of the offensive line and the playbook this offseason.

“When you look at our group as a classroom with (running backs) coach (Thad) Ward, we understand the offense a little bit more,” Echard said. “We know what other guys are doing on the team, so it helps us with our reads and everything.”

Foster and Echard both redshirted their freshman seasons. The pair has been together since Echard was a walk-on linebacker in 2013.

Echard said he knew Foster has been waiting for his time to be a leader.

“Kendrick is my guy,” Echard said. “He has been waiting a long time. I always knew he was a great player, but with the way he works, it just brings emotion to the group … He lets everyone know: ‘Let’s go, we’ve got to ride.’”

Turner is bringing a similar attitude to spring ball. He has taken wideout Carmoni Green, an early enrollee freshman from Miami, under his wing.

“Carmoni is a very fast guy, similar to (2016 senior wide receiver) Justin Hardee,” Turner said. “I’m going to start to talk to him about how to use his speed.”

Turner said he knows the Illini need to work on being more disciplined and having more urgency this spring.

The senior is not afraid, however, to take notes from those around him.

“As a senior, I can (still) learn from everybody else,” Turner said. “It helps me learn when I’m telling the new guys what they need to do, so it goes both ways.”