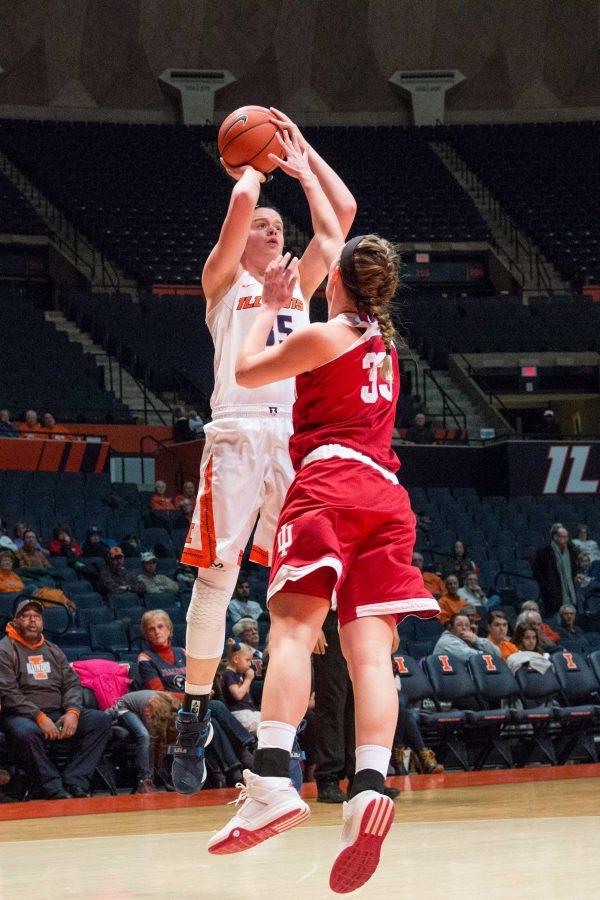 Illinois’ Alex Wittinger shoots a jumper over Indiana’s Amanda Cahill during the game against Indiana at the State Farm Center on Feb. 10. The Illini lost 70-68.

The last time Illinois came away with a win on the road was on Feb. 17, 2016 against Wisconsin. It was one of two conference victories during last year’s season and the team’s only away game victory. Although the Illini have won one more conference game this year, they continue to struggle on the road.

Illinois is one of three teams in the Big Ten that hasn’t clinched a road victory, posting an 0-11 record away from the State Farm Center this season. Nebraska and Rutgers are the other winless teams, with road records of 0-9 and 0-13, respectively. Illinois outscored both teams by a combined 57 points and defeated both of them at home earlier this season.

“We just didn’t play well offensively (against Northwestern),” head coach Matt Bollant said. “We have got to find a way to make shots. We have to do that better against Wisconsin. Against Big Ten teams you have got to score more than 53 points.”

Bollant said that his team competed hard against the Wildcats and pointed out defensive efforts. Northwestern shot just 33 percent from the field and 21 percent from beyond the arc. The Wildcats turned the ball over 16 times, their fourth-highest total of the season.

Illinois will look to jumpstart its offense against a Wisconsin defense that is ranked last in the Big Ten in steals. The Badgers are also ranked No. 12 in blocked shots and last in opponent three-point field goal percentage.

Wisconsin’s inability to contain shooters may open up an opportunity for sharpshooter Petra Holesinska to rebound from a poor performance against Northwestern. Against the Wildcats, she was just 2-of-11 from the field and scored only four points.

Holesinska has not been the most consistent offensive player for the Illini, but she has shown that she can stretch the defense when her shot is falling. Illinois’ starting guard leads the team in made three-pointers with 45 and has had three games with at least five made threes.

Sophomore Alex Wittinger thinks her team will need more movement on offense to be successful against the Badgers. She acknowledged that there are players on her team who can create their own shots, but she said they will have a better chance of winning if everyone touches the ball.

“There needs to be more off-ball cutting and screening and just more motion,” Wittinger said. “If you have five people out standing there, it’s very easy to guard.”

Wittinger hasn’t shot the ball well in Illinois’ last two outings, but she has snagged double-digit rebounds in three straight games and will try to continue that trend against Wisconsin. Wittinger is ranked third in the Big Ten in offensive rebounds with 89.

Junior guard Cayla McMorris leads the way for the Badgers. Wisconsin’s guard is averaging a team-high 12.5 points per game. Bollant said that McMorris is the Badgers best player but added that Wisconsin is not a one-woman team.

“They have really good balance,” Bollant said. “They’re a really good rebounding team. They have a couple kids that can shoot it, and they go to the boards really hard.”