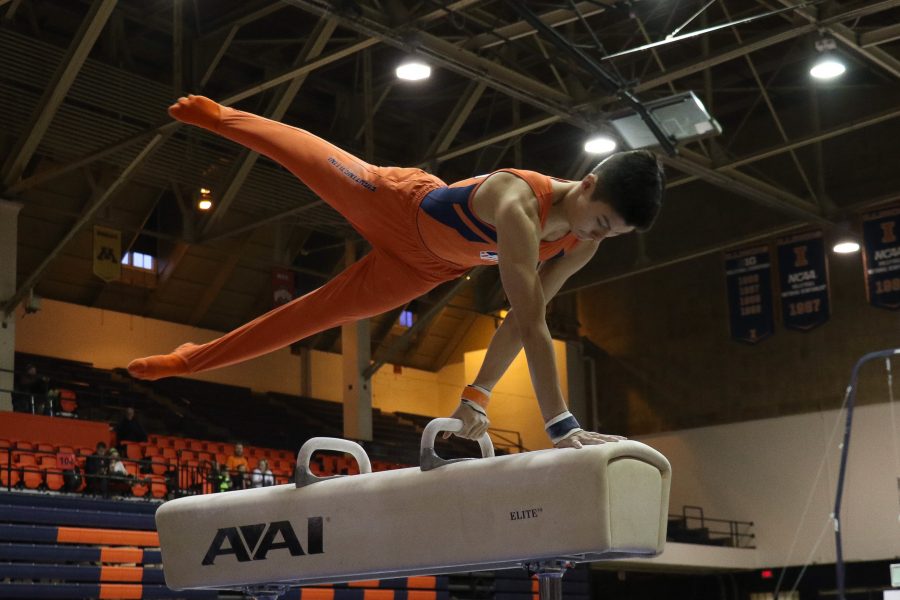 Illinois’ Brandon Ngai works the pommel horse in the meet against Minnesota at Huff Hall on Jan. 28.

The Illini are gearing up for a Saturday meet against No. 10 Iowa after a grueling three weeks of training after the team’s most recent Feb. 3 meet.

“We may go a little risky and put some routines that still aren’t quite ready to be in (competition), but (we’re willing to) take the risk because at some point if you don’t start competing (with) the routines, the upgrade goes away,” Spring said.

In the team’s last competition, Illinois prevailed at home over then No. 6 Penn State in a low-scoring meet. The final score was 411.350-404.550, and both teams fell well short of the performance expected prior to the meet.

The Hawkeyes are coming off their highest team score of the season (414.650) despite a third-place finish in a Feb. 10 home tri-meet against top-ranked Oklahoma and No. 5 Minnesota.

Four Illini and three Hawkeyes competed in the 2017 Winter Cup Challenge in Las Vegas. The annual competition took place Feb. 16-18 and featured the nation’s brightest talents vying for a spot with Team USA.

In order to determine overall scoring, the combined total from an individual’s preliminary session and event finals were used to determine the all-around and individual event champions.

Three Illini — Brandon Ngai, Alex Diab and Johnny Jacobson — qualified for Saturday’s finals and will have another opportunity to impress the 2017 World Championships Team Selection Committee.

Senior Joey Peters did not make the cut.

Both Ngai and Jacobson won event titles in the first session of preliminaries. Ngai won his first pommel horse title of the season while Jacobson earned his second on vault this year.

Diab received a two-day score of 28.150 for his floor routine, tied for sixth overall among his competitors at the conclusion of the meet.

Ngai put on a strong display as well in his first Winter Cup appearance.

“(Ngai) is without question one of the top-three pommel horse athletes in the entire world on any given day,” Spring said. “On a good day, if he hits the way I know that he can, doing the routine he can do, he could be a world champion.”

The 18-year-old was raised in Sacramento, California, making it possible for his family to attend. Ngai’s two younger brothers were also competing nearby in a junior level competition.

Before Tuesday’s practice in preparation for Iowa, Ngai grasped a prized possession he had brought to the Winter Cup — American flag pants he received from Spring upon winning his first individual national championship last season.

“I wore those (pants) to the practice days at Winter Cup, and I got a lot of compliments from the other guys around,” Ngai said.

In most years, as a reigning NCAA Pommel Horse Champion, Ngai would have easily qualified for the trial because of his All-American status.

However, this year’s committee only accepted three individual petitions. It was not until several weeks ago that Ngai learned he would compete alongside three other teammates in Las Vegas.

The pommel horse extraordinaire finished the weekend far ahead of the field with a score of 29.550 and was a close second to Alex Naddour, an established member of Team USA.

For Iowa, senior Andrew Botto and freshman Nick Merryman each recorded a top-10 finish in the Winter Cup event finals. Botto placed 20th in the all-around with his top score coming on the rings. He tied for ninth overall with a combined score of 27.800.

In the final session, Merryman put up his highest mark of the season on the pommel horse. Although well short of Ngai, Merryman turned in an eventual ninth-place finish with a combined score of 27.400.

The 2017 US Men’s Senior National Team’s final 15-man roster has yet to be determined by the selection committee. An official announcement will come at the conclusion of the USA Gymnastics National Championships.

The four-day competition is scheduled Aug. 17-20 in Anaheim, California.