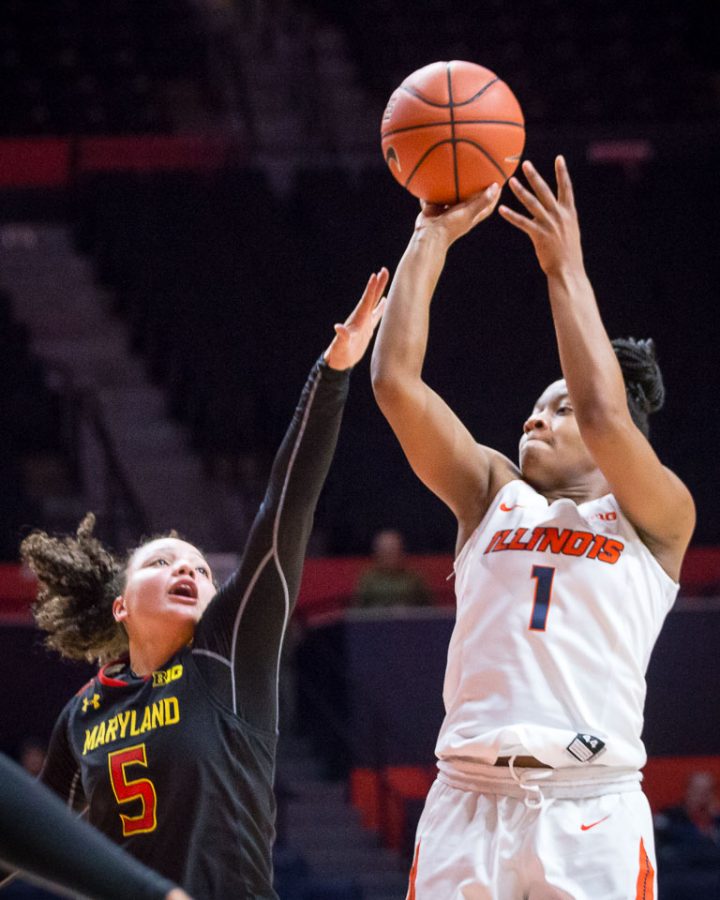 Illinois’ Brandi Beasley (1) takes a pull up jumper during the game against Maryland at State Farm Center on Thursday, January 26.

Scoring has been an issue for the Illinois women’s basketball team all season.

The Illini are averaging just over 62 points per game, and are ranked No. 12 in the Big Ten in scoring offense. Illinois is also ranked No. 13 in three-point field goal percentage and last in assists.

But when it comes to free throws, Illinois is one of the best teams in nation. The Illini are shooting 77 percent from the charity stripe, No. 1 in the Big Ten and top-20 in the country.

“We’ve got a lot of kids that can shoot,” head coach Bollant said. “But I will say it’s rare for freshmen to shoot a great percentage. For Petra (Holesinska) to be (shooting) 95 percent (in the Big Ten) is pretty good.”

Bollant also acknowledged sophomore Alex Wittinger as one of the best free throw shooters on the team. Illinois’ starting forward has attempted 55 free throws this season – second-most on the team – and is shooting 81.8 percent from the line.

In total, Illinois has five players shooting at least 70 percent from the free throw line, and four of them are ranked within the top six in the Big Ten.

Over the course of their Big Ten schedule, the Illini have faced a slew of top-tier guards.

Ohio State’s Kelsey Mitchell and Michigan’s Katelynn Flaherty are ranked first and third in scoring in the Big Ten. Mitchell is averaging 23.4 points for the Buckeyes, and Flaherty pours in 19.8 points a game for the Wolverines.

Freshman Destiny Slocum has helped lead Maryland to an overall record of 26-2, and Nortwestern’s Ashley Deary is ranked No. 15 in the country at 6.4 assists per game and leads the Big Ten in total steals with 104. Deary is the only player in the conference to eclipse 100 steals so far this season.

Freshman Brandi Beasley has had a chance to guard all of them and refuses to back down.

“It’s always fun playing other guards like that, especially as a freshman.” Beasley said. “I respect all of their games. I don’t take anything away from anybody.”

Beasley has emerged as Illinois’ biggest offensive threat during Big Ten play. She has scored in double-digits in nine straight games and is averaging a team-high 15.2 points against her conference opponents. Beasley is also No. 2 in the Big Ten in minutes played, totaling over 1,000 minutes this year.

Earlier this season following a loss to Purdue, Bollant shared high praise for his freshman guard. She had scored 20 points against the Boilermakers – her third consecutive 20-point game – and in the postgame press conference, Bollant said she has WNBA potential.

Since then, Beasley’s scoring production has dipped slightly, but she has found other ways to impact the game. Over her past four outings, she’s recorded 15 assists, and at just 5-foot-6, she has also snagged 18 rebounds.