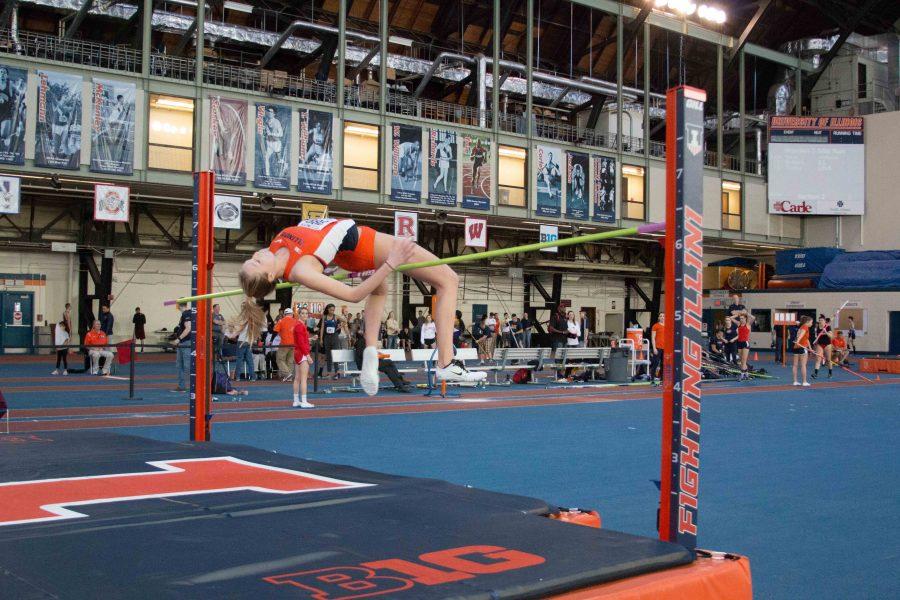 Hurdler Pedrya Seymour and high jumper Kandie Bloch-Jones have dominated the No. 24 Illinois women’s track and field team this winter.

Seymour is coming off a top-10 finish at the Olympics and owns the nation’s second-fastest time in the 60-meter hurdles. Bloch-Jones has won all but one high jump competitions this season while attempting the Illinois school record multiple times.

The team will face off against the conference’s best in Geneva, Ohio, for the Big Ten Indoor Championships. Seymour and Bloch-Jones are expected to lead the charge as the Illini look to improve on last year’s 13th-place finish.

“They’re some of the best in the history of Illinois,” head coach Ron Garner said. “They’re running national-level performances, which sets them up to be confident going into major-meet situations.”

Charlton is Seymour’s Bahaman Olympic teammate but did not compete at the games due to injury. She currently holds the nation’s fifth-fastest time.

The two have already gone head-to-head twice this season. At Kentucky’s McCravy Invite on Jan. 21 and 22, Seymour ran 7.98 to edge Charlton by seven hundredths of a second in the final. But at Notre Dame’s Meyo Invite two weeks later, Charlton ran 8.02 to scrap out a win. Minnesota also has two nationally-ranked hurdlers: No. 18 Kimberly Golding and No. 27 Emma Spagnola.

Bloch-Jones finished second at last year’s conference meet in the high jump to Boilermaker Janae Moffitt. Bloch-Jones, Moffitt and Nebraska’s Reka Czuth all could not clear 1.84 meters, and Moffitt claimed the title as she cleared the bar on one attempt at each previous height.

Bloch-Jones won the high jump at the indoor Big Tens her freshman year, and she’s already defeated Moffitt once this season at the McCravy Invite. While she comes into the meet with the highest Big Ten mark this season and a No. 6 national ranking, she faces a deep field of competition.

Moffitt and Czuth are back and ranked No. 12 and No. 18, respectively. Czuth and Moffitt finished first and second at last year’s outdoor Big Tens, respectively.

The high jump field is deep even beyond last year’s podium finishers. No. 26 Megan McCloskey of Penn State, No. 30 Claire Kieffer-Wright of Michigan and No. 30 Taylor Wiebke of Minnesota have all jumped within .05 meters of the top-three ranked jumpers this season.

Minnesota’s Heta Tuuri beat Bloch-Jones in the only competition she didn’t win this season at Vanderbilt’s Music City Challenge.

The only other top-three finish for Illinois last year came from middle-distance runner Nicole Choquette, who finished second in the 800-meter run. She competed in her first race of the season last weekend at the Orange and Blue Open, running unattached.

Sophomore Briana Driver has been on a hot streak as of late, setting a huge long jump personal best at Vanderbilt and finishing in the top-three of three events last weekend. Both Driver and junior Janile Rogers are currently in the top-ten in the Big Ten in the long jump.

“Athletically (Driver’s) improving and seeing herself as a much better athlete,” Garner said.