Illinois bounced in first round of conference tournament 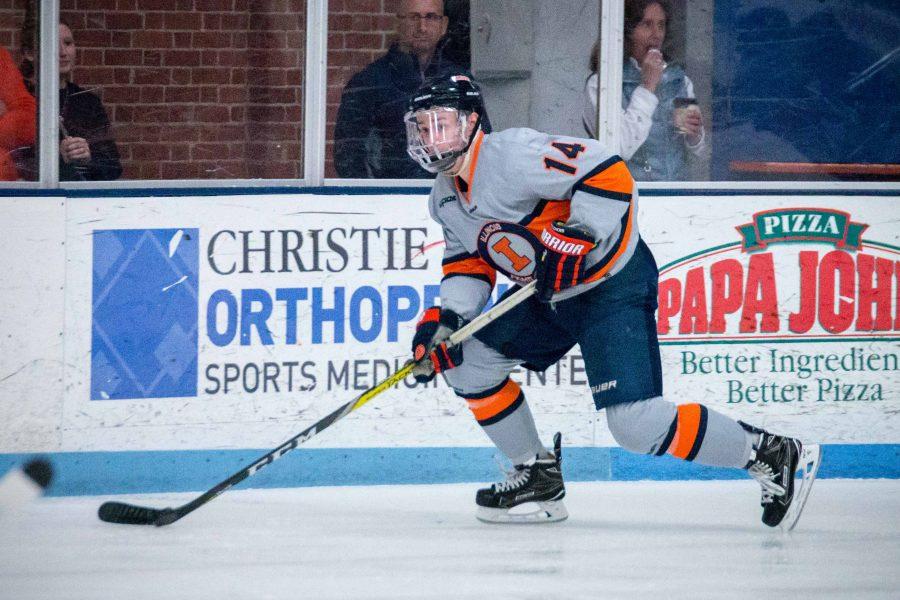 Illinois' Chris Lozinak (14) carries the puck up the ice during the game against Robert Morris at the Ice Arena on Saturday, Feb. 18.

Joey Caprio did not want to wake up last Saturday morning in his Bolingbrook, Illinois, home and not have a hockey game to go to.

Instead, after being eliminated by Robert Morris in the first round of the Central States Collegiate Hockey League (CSCHL) tournament for the second straight year, the junior defenseman had no other choice.

Illinois’ players – a majority of whom are from Illinois – drove home for the tournament at The Edge Ice Arena in Bensenville, Illinois, the home of the Robert Morris Eagles.

The Illini (20-10-3) never truly recovered after falling behind 3-0 in the first 20 minutes of the single elimination playoffs. Illinois roared back with three second period goals fell 5-4.

“I thought we played very well,” Caprio said. “It was unfortunate that we were down 3-0 after the first. I really didn’t think we should have been down 3-0, if not for a couple of bounces.”

A win in the tournament would have allowed Illinois to play top-seeded Iowa State on Saturday, a team it swept on the road in Ames, Iowa, last month.

The win never came, and the loss was credited to junior goalie David Heflin in the box score – his second regulation loss this season. Defending CSCHL MVP and senior goaltender Joe Olen was benched in favor of the hotter goalie, Heflin.

Olen missed a series against Indiana last month while playing for the United States in the World University Games in Almaty, Kazakhstan.

Head coach Nick Fabbrini has rotated Heflin and Olen in and out of the crease this semester. Heflin has eight starts in 2017 compared to Olen’s four.

“Heflin and Joe are both great goaltenders, and they’ve both had great years,” Caprio said. “Whoever we put in net we think is going to give us the best chance to win.”

Illinois and Robert Morris split a series at the Illinois Ice Arena last weekend to finish off their regular seasons.

Top-line forward James McGing earned two unsportsmanlike majors in the Illini’s 3-2 loss last Saturday. The league for three games, the first of which was the playoff game, suspended McGing.

Forward David Kellner stepped into McGing’s role on the top line for Illinois. The Eagles utilized McGing’s absence by keying into other Illini playmakers, like junior center Eric Cruickshank.

“When you’re missing one of your best players, that will impact the game,” Caprio said. “James is a unique player – he’s a special player that can control the game and the puck. Missing his presence out there was known.”

Robert Morris forward Ryan Martin had three points, including two goals, in the victory. Forward Brett Leppek had a breakaway first period goal to give the Eagles a 3-0 advantage.

Second period goals from freshmen Bobby Ernsting and Chance Homerin and senior Aaron Dusek tied up the game, but Martin put the Eagles ahead midway through the period.

The Illini head north again this weekend for a pair of tune-up matches with Augustana College in Oak Park, Illinois, before playing the Drexel Dragons in a first round matchup the ACHA national tournament on Thursday, March 9.

“We had our sights set on winning the tournament,” Caprio said. “Sometimes stuff doesn’t go your way, but we’ll move on.”