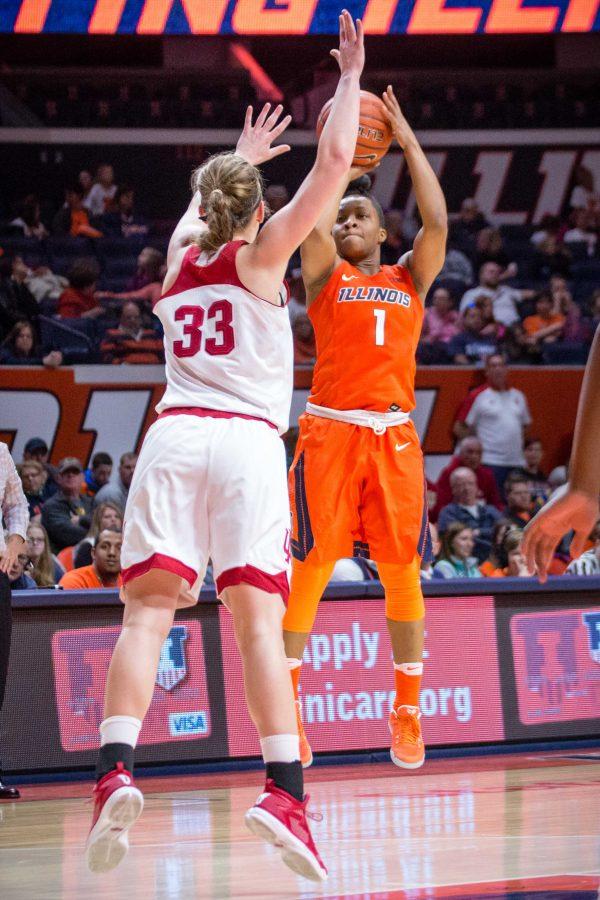 Illinois’ Brandi Beasley shoots a three during the game against Indiana at State Farm Center on Saturday. The Illini advanced in the tournament on Wednesday to play the Boilermakers.

Alex Wittinger did not suit up when the Illinois women’s basketball team took on Nebraska in the Big Ten tournament.

Wittinger is the Illini’s leading scorer at 14.4 points per game, but after injuring her left pinky finger against Indiana, she sat on the bench sporting a grey Nike Illinois shirt and a black bandage on her hand.

Before the game, freshman Brandi Beasley said that others on the team had to step up in Wittinger’s absence. Beasley responded to the challenge with her sixth 20-point game of the season, but the star of the game was freshman Ali Andrews.

Andrews started in place of Wittinger and poured in a career-high 24 points and six three-pointers, leading Illinois to a 79-70 victory. Andrews’ six threes are a program record for the most made three-pointers in a Big Ten Tournament game. She was also one of three Illini freshmen who eclipsed the 20-point mark.

“Give Ali a lot of credit,” head coach Matt Bollant said in the Big Ten Network’s post-game interview. “(She) came in and knocked down threes, Brandi as well going 3-for-3. (In) 20 years of coaching I’ve never had a freshmen group live in the gym like these kids, and they came out and showed why today (by) making a lot of shots.”

Wednesday’s win was the first Big Ten Tournament victory of Bollant’s career and Illinois’ first victory since it last defeated Nebraska on Jan. 15. Unlike the previous game, in which Illinois won by 20 points, both teams traded runs until the Illini were finally able to pull away.

Freshman Petra Holesinska shot 5-14 from the field against the Cornhuskers, making two of her 10 three-point attempts but found other ways to impact the game offensively. She handed out four assists and knocked down a game-high nine free throws, finishing with a career-high 21 points.

When it was clear that the Illini would move on to the next round, Bollant subbed Andrews out of the game. When she walked back to the bench, the freshman was mobbed by her teammates. Despite her injured hand, Wittinger hugged Andrews tightly and patted her on the back.

Beasley said before the game she texted Andrews and encouraged her to embrace her role as a starter. She also told Andrews to take advantage of her offensive opportunities, and during the game it was clear that Andrews took what her point guard said to heart.

“She was a big part of what we did today,” Beasley said in the Big Ten Network’s post-game interview. “I know how she’s feeling with Alex not being in there to help her. I just told her to take what the defensive gives her and let it flow.”

After squandering a 16-point lead earlier in the game, Bollant was pleased with his team’s poise down the stretch. The Illini outscored the Cornhuskers 23-9 in the fourth quarter and will face Purdue tomorrow. The Boilermakers are the fifth seed in the Big Ten Tournament.

Earlier this season, Illinois lost by eight points to Purdue at home. Holesinska nailed a career-high five three-pointers in that game and scored 21 points. But the Boilermakers were even more lethal from beyond the arc, knocking down nine three-pointers in the first half. Purdue’s Ashley Morrissette led all scorers with 23 points.

“It starts with Morrissette,” Bollant said. “What a great point guard. We recruited her really hard, so we know her really well. And the (Boilermakers) are just physically gifted. I think that’s the biggest thing. We gotta be able to match their physicality.”