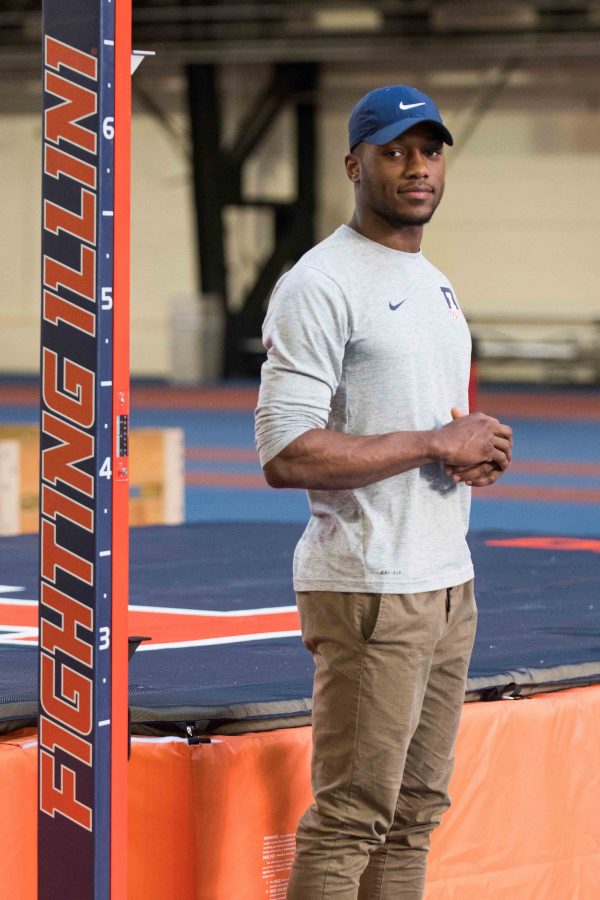 The sophomore put his left leg in front of his right, swayed his body back and forth three times and then accelerated to attempt clearing the 2.03-meter bar.

He didn’t make it, much to the surprise of him, his coaches and teammates.

Wells tried a second time — but again to no avail.

He faced one more attempt to clear seemingly the easiest bar he would face on the day. If he did not succeed, any hopes of becoming a Big Ten Champion would disappear.

Wells returned to his starting position, went back to his routine and took off.

This time, Wells did not make any contact with the bar, escaping to the next round of competition.

The event is one of Wells’ strengths; he finished third out of 17 jumpers at the Iowa State Classic earlier this season. The high-jumper said he did not have a good explanation as to why he started out poorly.

“You know, nothing was necessarily going my way on Saturday,” Wells said. “When I got to that third bar, I mean, that’s every high-jumper’s nightmare because anything can happen…you could slip, miscalculate it, but I just focused on clearing that bar.”

Indiana’s Paul Galas and Treyton Harris and Minnesota’s Ryan Lockard joined Wells in the next round at 2.17 meters.

Wells missed on his first attempt but cleared his second. Galas and Harris failed their first two attempts but succeeded the third time while Lockard did not advance to the next round.

Not one of the three athletes could clear the next round’s height of 2.20. Because Wells warranted just two attempts to clear 2.17 meters as opposed to Galas and Harris’ three tries, Wells was the champion.

“I was satisfied with the win, but I wasn’t content,” Wells said. “There was a lot of stuff going through my head — that wasn’t the meet I had wanted not clearing 2.20, but that’s just the life of an athlete. You’re always looking for that better expectation of yourself.”

Along with the 2017 Big Ten high-jump title, Wells has accomplished other feats on the track.

The Fox Lake, Illinois native attended Grant High School in north suburban Illinois and is a two-time IHSA high jump champion. He said his experiences in high school have helped him battle through anxious moments like trying to clear the bar on a third try.

“As (head coach Mike) Turk said in the team meeting, you gotta look back and know your training, you’re prepared for the situation,” Wells said.

Wells will next be in action again at the NCAA Indoor Championships on March 10 and 11. Turk said he is optimistic about his high-jumper’s chances of having one of his best performances at the meet.