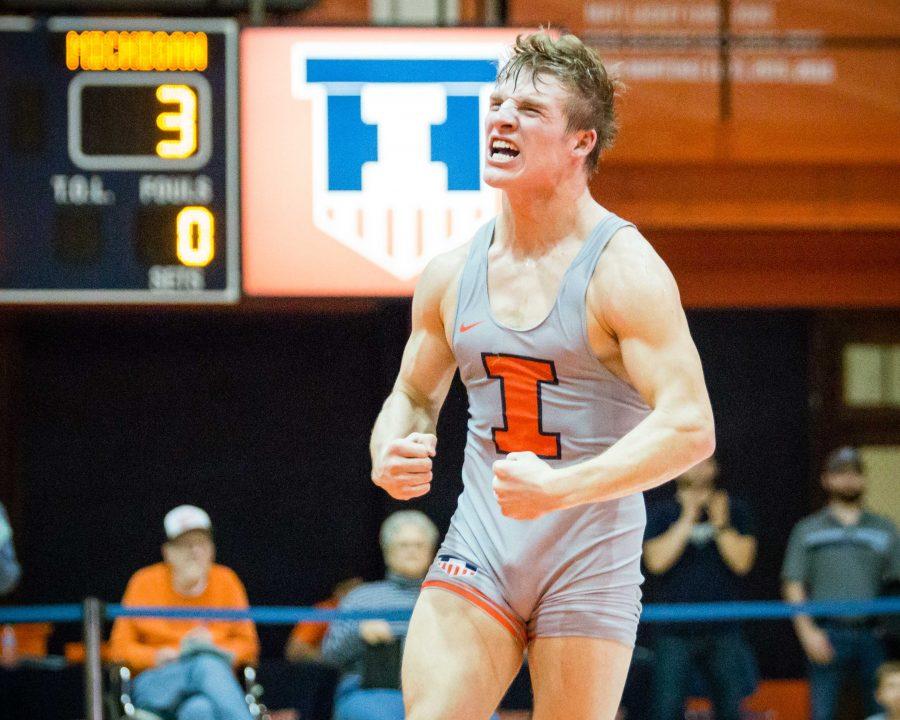 Illinois’ Kyle Langenderfer celebrates after defeating Michigan’s Brian Murphy in the 157 pound weight class during the match at Huff Hall on Jan. 20. Langenderfer and eight of his roommates are preparing for the Big Ten tournament.

It’s been almost a month since the Illinois wrestling team’s last dual meet.

Despite the time off, the Illini are confident that there will be no rust this weekend in the Big Ten tournament.

“With what we did the last six weeks of the season, I think not having competition for two weekends in a row is a great thing,” head coach Jim Heffernan said. “It let them be regular college students again.”

While the Illini haven’t been wrestling other teams, they have been practicing at Huff Hall.

“It hasn’t really been a break at all,” sophomore Emery Parker said. “We’ve been going harder than we have been during the season.”

The team has been going so hard, team members said they can’t wait to get back to wrestling other people.

“We’re kind of sick of each other,” junior Kyle Langenderfer said.

While the tournament is more for personal goals and qualifying for the NCAA tournament, Parker said that he’ll still be looking to his elder teammates for examples.

“They’re always in our ears.” Parker said. “It’s not always what they say, it’s how they act, their composure.”

The team’s youthfulness may work out in their favor. As Jodeh said, “(We’ve) got nothing to lose.”

However, the Illini upperclassmen don’t have as much time to add another mark to their legacy.

Martinez has yet to lose a match at the 165-pound weight class, and enters the Big Ten tournament as the No. 1 seed. Having already defeated both the No. 2 and No. 4 seeds in the tournament, Martinez said he isn’t too nervous.

“I was already confident going in before, but now I feel great,” Martinez said. “I’ll be looking to open things up.”

While Martinez looks for his third Big Ten title, Richards is looking for his first. After placing second in 2016, Richards thinks this time will be the charm.

“I feel like I’m going to win,” Richards said. “I don’t know how to describe it, but it’s like a wave of momentum around me. The air is just different this time, and I like it.”

This will be Richards’ last shot at a Big Ten title — another accolade to add to his numerous awards from his time at Illinois — but he is thankful he can keep wrestling.

“I’ve been given the opportunity to wrestle a little bit more in my career,” Richards said. “I have a purpose.”

To put it short, according to Martinez, “It’s the best time of the year.”