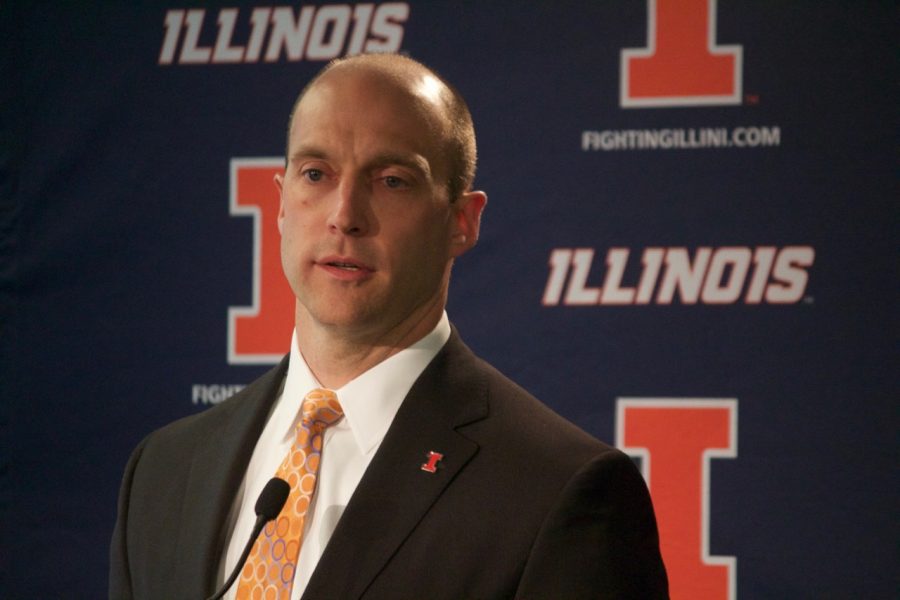 Just over a year ago, Illinois Director of Athletics Josh Whitman fired head football coach Bill Cubit, after a tumultuous year for the football program.

There’s still playing time for the basketball team, and Groce showed up to his farewell press conference.

It was clear that this was a different and much more difficult decision for Whitman after he had gotten to know Groce well throughout the year.

A year into Whitman’s own tenure, he’s confident and secure in his decisions. Rightfully so, as he seems to be making all the right moves, satisfying fans and Illini observers alike.

Bringing in Lovie Smith as head coach for the football team was the best move for the program and brought the most excitement likely since the the 2007 Rose Bowl squad.

There was a sellout game against North Carolina and a massive outpouring of fans unseen in my years at Illinois. There was a genuine excitement for the future.

But the basketball program didn’t undergo the massive scandal that the football team went through. Some players were arrested last season, but the main issue was failing to perform and make the NCAA tournament.

A four-year drought is too much for Illini fans and they made that clear from the start. Even Whitman said that Groce knew it was a big year for the team.

Groce had the recruits in the bag and seemed to be close enough with Whitman where he’d give him the extra year. Illinois would also save some money in the process.

But that’s why I’m a journalism major and not an athletic director.

And that’s why Whitman has put Illinois in good hands on the business front, and the people front.

Like football, the basketball program will require a multi-million-dollar replacement. One who will generate lots of publicity and the same caliber of athletes.

As he said, the two sports pay the bills for the whole athletic department.

While unhappy fans weren’t the deciding factor, he seemed aware that many were discontent with the program’s future.

So when Groce showed up to his goodbye, many were shocked. There was even a pause after he made his opening statement, as reporters struggled to think of a question.

“Surprised you guys didn’t I?” Groce said, followed by a version of “didn’t think I’d show up, did you now?”

It was an example of what made the decision so hard for Whitman.

Groce got the last laugh in terms of image, as how many coaches and administers have come to their firings in the past 18 months?

He proved his moral stock, but he just couldn’t get it done on the court. As he thanked loyal fans, you couldn’t help but think that some were a part of the reason he was fired.

The former basketball coach talked about how thankful he was for his opportunities, taking responsibility and saying there was always a plan behind everything he did.

The problem is the plan just wasn’t executed in the way Whitman would have liked.

Now let’s see where Illinois stands a year from now, and how Whitman’s own plan takes shape.