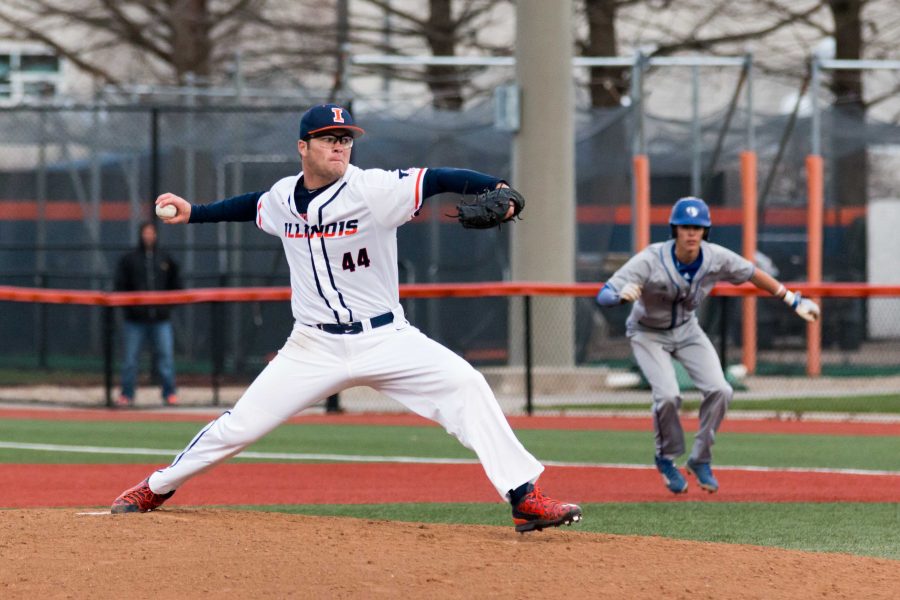 Illinois starting pitcher Quinten Sefcik delivers the pitch during the first inning of the game against Eastern Illinois at Illini Field on Tuesday, April 5. Sefcik pitched four innings and gave up seven hits and two runs. The Illini won 9-7.

So far this season, Illinois baseball has not played a game closer than 800 miles from Champaign.

Finally though, after one weekend in South Carolina, one in Florida and two in Texas, the Illini are set to begin their first homestand of the year.

The snow kept the team from its first scheduled home game on Tuesday, but as of now they are set to play four games over the weekend starting with a Friday matchup against Toledo.

“It’s just good to be home,” head coach Dan Hartleb said. “You get to play on your own field, we have great fans here, and I think that’s a huge plus for us.”

He also said he thinks the extra rest and familiarity with its surroundings will give the team an extra boost heading into this weekend.

But, even though the Illini are happy to be home, Hartleb added that traveling so much is not always a bad thing.

“I like the early trips,” Hartleb said. “Just from the standpoint that they live together, eat together and they have to communicate together. So I think that’s really good, but now, we’re at a point where the familiarity of home is gonna be good for us.”

Following the four-game series with Toledo and Southern Illinois, the Illini will continue their homestand, playing 13 straight games at home before another road trip.

Saturdays are for Ty Weber

“Saturdays are for the boys,” is a popular expression that’s been thrown around lately. But during the last couple of weeks, Saturdays have been for Ty Weber.

In his last two starts — both on Saturdays — Weber has gone 13 and 2/3 innings while allowing just two earned runs, striking out 10 and only giving up three walks. Not to mention, he also went seven innings before giving up his first hit of the game against Coastal last weekend.

Even with the no-hitter going, Weber said that he approached the game just as if it were any other.

“It was just kind of something,” Weber said. “Every batter was a new guy. You just try to get every batter out. The approach always stays the same. One pitch at a time, one batter at a time and never look forward to ‘what-if’s.'”

Weber has emphasized that the key to his recent success has been his focus on throwing strikes and not going for the strikeouts.

“I think he’ll continue to pitch at a high level,” Hartleb said. “He’s a very intelligent person and a good pitcher. He learns from his mistakes and from things that happen in games.”

Most weekend series consist of just three games, but this weekend, the Illini will play four.

Weber, Cole Bellair, Luke Shilling, Quinten Sefcik and Ryan Thompson have all started games for the Illini this season, but Hartleb said that he is uncertain who will be starting the final game on Sunday.

“It’s going to be a TBA thing,” Hartleb said. “We have some guys that are capable of going out there, but if we have to use somebody to win one of the other games, we’ll do it and worry about the last game.”

He also added that the main reason they are not scheduling a fourth guy is that there is no guarantee the game will even be played.

“You can’t worry about Sunday when it can snow,” Hartleb said. “You may never play that game. So we’ll worry about Friday’s game. Once we get through Friday’s game, we’ll look at Saturday’s game and so on and so forth.”