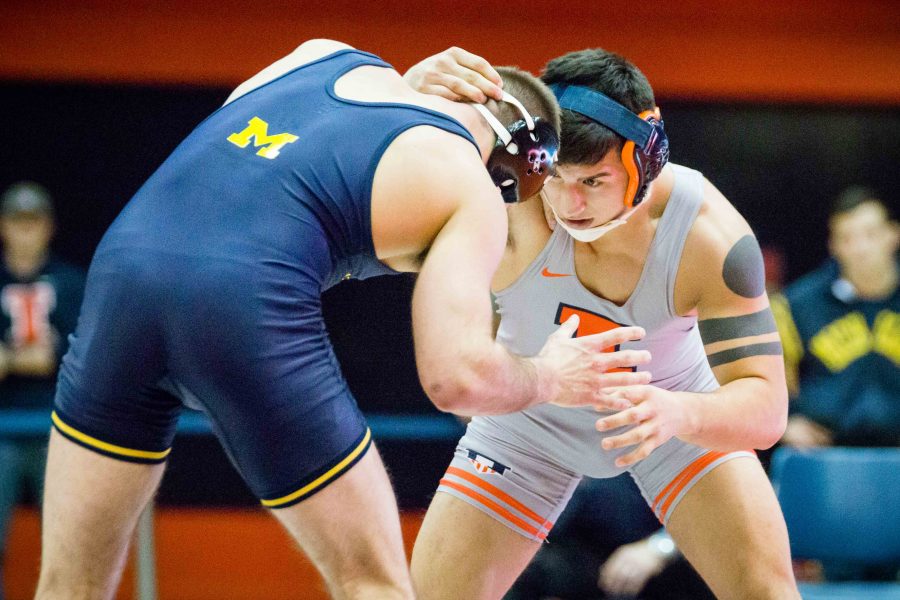 Illinois' Isaiah Martinez wrestles with Michigan's Logan Massa in the 165 pound weight class during the match at Huff Hall on Friday, January 20.

The match started like any other one for Isaiah Martinez. However, it quickly shifted to unfamiliar territory.

Martinez began by taking down Penn State’s Vincenzo Joseph on Saturday, March 18, and gaining a 2-0 advantage. However, the Penn State freshman rallied with an escape and a takedown and entered the second frame tied at three.

Both wrestlers scored two points in the second period and entered the final two minutes tied at five. Joseph pinned Martinez in the third period after landing the inside trip that had helped him get to the final earlier in the tournament.

It was the first time that Martinez had lost a postseason match, and it was only the second loss of his career. Both losses have come via Penn State wrestlers pinning him.

“It was a tough match for Isaiah,” Illinois wrestling head coach Jim Heffernan said. “He got caught on his back in a good hold and got pinned.”

Martinez has defeated Joseph twice in his collegiate career, once in the regular season and once in the Big Ten championships.

For the first time since 2012, Illinois did not have a national champion.

“Nobody leaves this game unscathed. I’ll be back” Martinez tweeted after the loss.

“He is still a two-time champion and will use this experience to get better,” Heffernan said.

However, it wasn’t all gloom for the Illini as Martinez, Zane Richards and Zac Brunson all earned All-American honors for their performances. Richards placed seventh at 133 pounds and Brunson finished sixth at 174 pounds. None of the other Illini finished in the top eight. This is the second year in a row that the Illini have had three All-Americans.

The Illini finished 11th as a team with 43.5 points, falling behind team champions Penn State who accumulated 146.5 points.