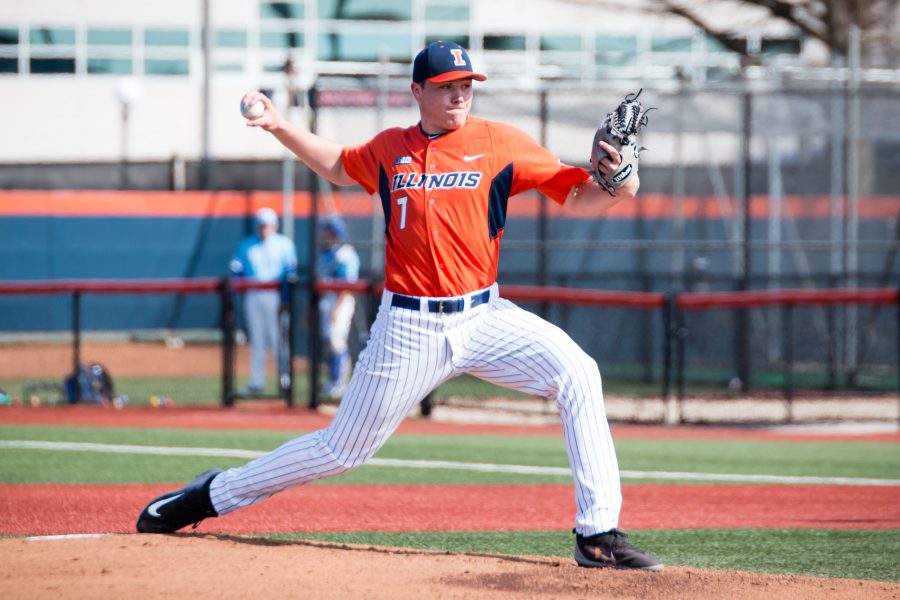 Illinois starting pitcher Ty Weber (7) delivers the pitch during the game against Indiana State at Illinois Field on Saturday, April 1.

Back in February, the Illinois baseball team played a three-game series in Corpus Christi, Texas.

They went 1-2 during the stand after suffering losses to Houston and Missouri.

The Houston game was tough for Illinois as it fell 11-5, but its matchup with Mizzou was a different story.

Despite dropping the game 7-6, the Illini played tough in one of their biggest challenges thus far in the season.

Illinois will look for revenge Tuesday when it faces the Mizzou in its annual neutral-site matchup.

Prior to their Texas meeting, the Illini had lost four of five games and were still looking for their first series win of the season. The pitching staff had been facing control issues and were allowing eight runs per game.

But this time around, things were different.

This past weekend, the Illini won their first series of the year, completing a three-game sweep of Indiana State on Sunday. The Sycamores previously had won two of four games against No. 12 Washington and were on a five-game winning streak heading into Champaign.

Also notable is that the pitching staff allowed just two runs per game in the series. Aside from the improved pitching, the offense also stepped up this weekend.

Senior first baseman Pat McInerney was the biggest offensive standout, chipping in three home runs and going 4-9 on the weekend.

McInerney said that he was happy to be back on the winning path and that performing well in these big games means a lot to him.

“It’s fun to hit all these home runs and whatever, but a lot of (them) have been in meaningless games,” McInerney said. “But this weekend, they were all meaningful, and those are the home runs that are fun to hit.”

Both sides were a huge factor in each of the team’s three wins — its longest winning streak of the season.

Head coach Dan Hartleb said that he thinks the wins should give his team some extra confidence heading into the weekend.

“I’m hopeful the guys have learned some things and can carry it over from a mental standpoint,” Hartleb said. “Physically, we were better. We showed that we can beat a good team. We’ve played some other teams very, very well and come up just short, so I’m hopeful that we can continue at a high level.”

McInerney echoed Hartleb, saying that getting the first series win out of the way is huge for the team going forward.

The Illini will play Tuesday at GCS Ballpark in Sauget, Illinois.

The pitching staff has had its ups and downs all season, but one consistency has been freshman pitcher Ty Weber’s strong performances.

This weekend was no different.

In Weber’s lone start, he threw a complete game, allowing just one run on four hits. The righty also struck out seven batters and walked one.

Hartleb said that he has been impressed with Weber all year and that he is deserving of the awards.

“He’s had some very, very good outings for us,” Hartleb said. “He was very much deserving of the award(s) this week. It’s very difficult to win those awards, but Ty is very deserving of it. He pitched very well, and he just keeps getting better and better.”

The strong performance earned Weber his second career win, bringing him to 2-2 on the season. His ERA is down to 3.80 — good for the lowest among starters.