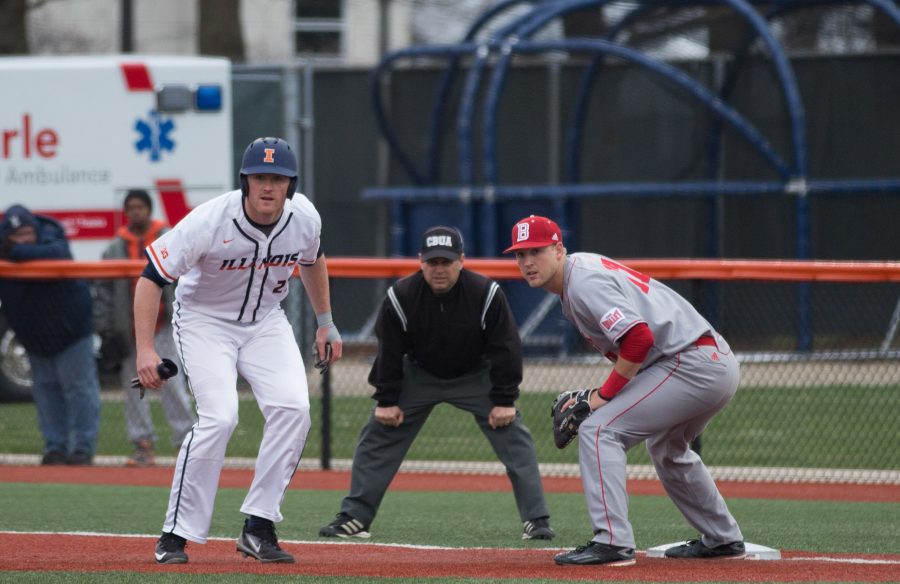 Pat McInerney (27) takes a lead off of first in anticipation of stealing second base against Bradley at Illinois Field on Tuesday, March 28.

Illinois first baseman Pat McInerney’s mindset is not looking for a first-pitch fastball or to shorten up his swing with two strikes — although, he is brilliant at both.

Instead, his key to success is swagger.

“Just having the feeling of showing up to the field every day knowing you’re going to win — having that kind of swagger — more times than not, you’re going to end up on top,” McInerney said.

The senior is the only Illini starter left from the 2015 squad,  a team notable for McInerney’s version of swagger. The 2015 ballclub posted a school-record 50 wins, achieved a 27-game winning streak and was knocked out in the Super Regionals by future No. 1 MLB Draft pick Dansby Swanson and national runner-up Vanderbilt.

Before sweeping Indiana State at home last weekend, Illinois sat at 6-16 and were uncompetitive against Michigan State in its first Big Ten series of the season.

Any resemblance of the 2015 team seems to have dissipated.

“The biggest thing two years ago was that we showed up to the park every day knowing we were going to win,” McInerney said. “That kind of attitude helps when you do win, and you can have that feeling.”

McInerney has done his best in 2017 to keep the Illini competitive; he is on pace for career-highs across the board with 11 home runs, 26 RBIs and a .427 on-base percentage through 25 games.

The Glen Ellyn-native, who had 13 career home runs entering this season, was the difference in the series against Indiana State.

He started the series Friday night with a solo shot in the fourth inning, which ended Illinois’ 12 1/3 inning scoring drought. Saturday’s game was more of the same, except the solo home run was a walk-off bomb in a 2-1 victory. McInerney finished his big series with a two-run homer Sunday to complete a 4-for-9 weekend with three home runs and four RBIs.

“It was just one of those weekends where I was seeing the ball well,” McInerney said. “In baseball it comes and goes, and that is something you learn every year as you grow older.”

Not a full-time starter until 2015 — and not the starting first baseman until this year — McInerney has embraced his role as the team’s leader.

Head coach Dan Hartleb’s team does not have captains, but that does not stop the 6-foot-5, 240-pound senior from taking charge.

Hartleb said McInerney realized last season that the team was lacking much leadership from its young core of players.

“He has always been very mature,” Hartleb said. “But I think he looked around last year and thought that maybe this was a situation where we could have a little bit better leadership. He learned some things that he wanted to be different about the team and the way we were going about things.”

The head coach has praised McInerney for holding his teammates accountable and working with some of the younger starters, including designated hitter Casey Dodge.

Dodge arrived at the University in 2015 as a freshman majoring in consumer economics and finance. He lettered for three years in baseball at Barrington High School in Barrington, Ill., but was never scouted, despite hitting .477 as a senior.

Dodge wasn’t ready to give up baseball just because he did not get recruited. He attended the open tryouts as a freshman and was Illinois’ bullpen catcher last season.

“I really, really wanted to do something special here,” Dodge said. “I didn’t know if I’d ever play. I worked hard to see where it would take me, and I got one shot, and I’m just trying to do the most I can with it.”

Dodge’s shot has come this year in an upgraded role as the team’s designated hitter, batting cleanup behind McInerney.

“He’s taught me a lot, especially from a hitting standpoint,” Dodge said. “From a confidence level, he told me to go up there and get your pitch and be ready for it at any moment.”

‘Any moment’ turned out to be leading off the fifth inning against Indiana State’s Jeremy McKinney on Sunday afternoon.

With a 1-0 count, Dodge turned on a fastball and crushed it down the left-field line and watched it sail over the fence for his first career home run.

“I was looking for one fastball — and one fastball only — and it was there,” Dodge said. “I just tried to put a good swing on it.”

Dodge called McInerney “an absolute great leader and a great guy … the absolute leader of this team” when the pair arrived in the press box at Illinois Field following the game.

However, it was the first baseman who had the most to say, even after a career weekend.

“(Dodge) goes from walk-on for last year and comes in and is our four-hitter,” McInerney said. “It’s really cool, and I know he’ll continue to do well.”

He’s doing his best on the field to keep the team afloat in the Big Ten standings during a rough start that saw Hartleb’s team lose seven of its first nine home games. His numbers appear strong enough to make a case for a team to select him in June’s MLB Draft.

“The team comes first,” McInerney said. “If I’m at the end of the season and I’m lucky enough to get drafted, that’d be great. If not, then so be it. The primary goal, currently, is to win the Big Ten. That’s something I’m trying to tell the freshmen and sophomores.”