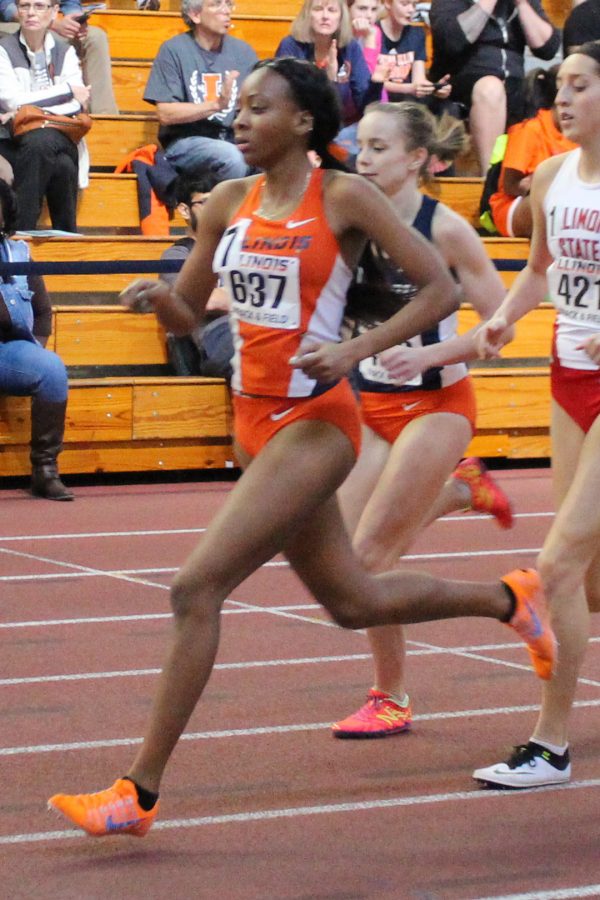 Illinois’ Ines Vias returns a ball during against DePaul at the Atkins Tennis Center on Feb. 19.

Pedrya Seymour collected her second-consecutive win in the 100-meter hurdles with a time of 13.19. The junior is ranked No. 9 in the 100 hurdles nationally.

The Illini captured one field event title when senior Kandie Bloch-Jones recorded a 5-foot-7 in the high jump.

Sophomore Jayla Stewart chipped away at her time in the 100-meter hurdles, clocking a 13.28 run, just one-tenth of a second away from her overall personal record set last year.

Following last weekend’s success in the 4×100 meter relay was the team of Briana Driver, Janile Rogers, Jayla Stewart, and for the first time this season, Seymour. The Illini finished second with a time of 45.01 but set a season-best for the relay.

Head coach Ron Garner said the wind was an important factor in the success and some of the challenges the team faced this weekend — especially for the middle distance Illini.

“There were some pretty stiff winds, especially coming off the back stretch,” Garner said. “It was a good workout for Nicole (Choquette). Having to come off of that wind, you aren’t going to be feeling the same way in the last 200 meters as you would normally feel.”

Although multi-event athletes like Driver trimmed down time during sprints, they faced challenges with wind when it came to jumping events.

The gusts were clocked at just over 10 mph, but in the 100 meters event, Driver led the Illini with an 11.74. Junior Janile Rogers and sophomore Sade Hargrove followed Driver at 11.78 and 11.82, respectively.

Garner said the meet was a success and is looking forward to chasing down faster times in the coming weeks.

“We had a really great 80-degree day to run in,” Garner said. “We felt like we got great work in and had a great trip overall. I’m looking forward to the next couple of weeks and the progress we can make.”