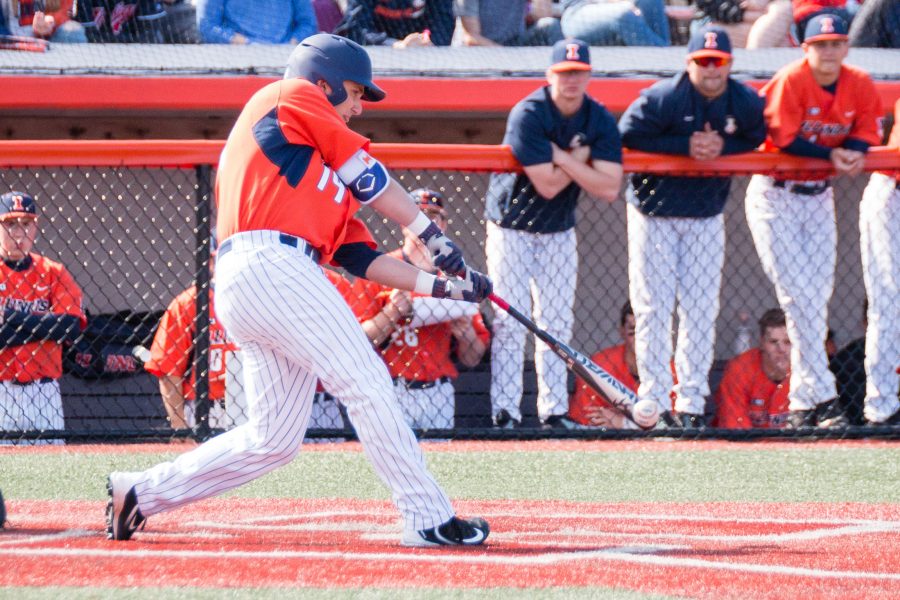 The team has split the first four games on the trip, sandwiching a pair of rough losses at No. 18 Michigan with quality victories over Missouri and the Wolverines.

Illinois has wins in five of its past seven games, while the Redbirds have dropped five of their last seven contests. Another Illinois win secures a season sweep over its in-state rival.

“We have similar records,” Hartleb said. “We need to come out and play well, and I’d like to see us swing the bats a little better from top-to-bottom in the lineup.”

Senior Matthew James, a native of Normal, Ill., will get the nod from Hartleb to start on the mound.

“We’ll hopefully get into some later innings from him,” Hartleb said.

Illinois returns home this weekend for a series with Big Ten rival Northwestern.

With a young starting rotation and a slow start to the 2017 season, Hartleb’s team has been reliant on the bullpen to eat up innings and keep it close late in games.

The bullpen trio of freshmen Ryan Schmitt, Ryan Thompson and sophomore closer Joey Gerber was lights out over the weekend at Michigan. The pitchers combined for five innings of relief and allowed zero runs in Illinois’ Sunday win.

“If you look at all three of those guys, they’re just starting to relax more,” Hartleb said. “Earlier in the year, they were pressing and hadn’t had the experiences.”

Gerber has been effective out of the bullpen as of late. He has 10-consecutive outings allowing zero runs and 24 strikeouts in 18 innings this season.

Hartleb attributes Gerber’s dominance — and team-high four saves — to his secondary pitches like his slider.

He said it’s still Gerber’s fastball that is the most lethal.

“(Gerber) has a good slider, but his fastball has been thrown with good location,” Hartleb said. “If you locate your fastball, you always have a chance to get guys out.”

Entering Sunday’s matinee in Ann Arbor, left fielder Dan Rowbottom was 1-for-16 in the previous five games. Rowbottom’s .157 average is also the lowest of any Illinois starter.

Hartleb continued inserting the redshirt junior into the lineup knowing it would pay off eventually.

Rowbottom snapped out of the slump with a three-run homer to right field in the third inning to extend Illinois’ lead to six runs over Michigan.

“I don’t think he’s needed to change his approach,” Hartleb said. “He came up with a big hit.”

“(Rowbottom) has scuffled some this year, but he hasn’t given in,” Hartleb said. “It was good to see him have a good day.”